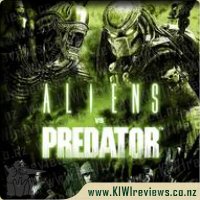 In the all-new Aliens vs. Predator players will have the chance to take the role of the three infamous species; the Colonial Marine, the Predator and the Alien. Each of the three species has its very own distinct story-driven single-player campaign mode that interweaves with the campaigns of the other two species. Aliens vs. Predator will also feature unique 3-way online multiplayer, allowing gamers to pit the three species against each other in the ultimate battle for survival and for the right to be crowned the deadliest species.

I grew up having seen the movies in the Alien franchise and Predator franchise at least once, and then the Aliens vs. Predator movies so having played one game based upon these movies, I was keen to give this game a good try.

The first thing that I liked about the game, and thought was interesting, was that you are given the option of playing a Marine, a predator or an alien and you can leave one campaign at a certain point and go play another if you feel like a change of scenery or are sick of being killed repeatedly by the aliens and want to be an alien doing the ass whooping instead. As you move through the campaign you find that each story intertwines with the rest in a decent enough storyline, not that there is a need for much of a storyline, it's pretty much just kill, kill, kill.

The graphics are good enough, though my main complaint was that half the game play was so dark that there were times that it was just plain to hard to see at times and I had to turn up the brightness level on my TV just to see some parts better, which of course was annoying for when I had to turn it back down the the outdoors during the day parts of play.

This is fun for passing some time, but not the best game I have played in relation to the two franchises.

You get given the choice when you first load the game to be either and Alien, a Predator or a human fighter. In each version you have a set objective, but while it can be fun to get to pick which character to be, the storyline is too short in each version to make it a really decent game. Its gameplay is very limited and you are on a very set path.

Considering my expectations this wasn't a good game and it didn't take long at all to clock. Not a game I would play very often.

Call of Duty tackles a whole new era as Black Ops plunges you into the murky height of the Cold War and history's most secretive battles. The world's most popular first person shooter places you in the most dangerous conflict zones of the late '60s.

From the jungles of Vietnam to the snowy wastes of the Ural mountains, you and your team must operate behind enemy lines and using only the limited technology of the time. ... more...