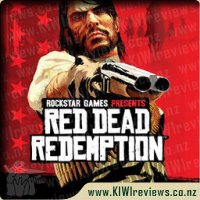 Red Dead Redemption features an open-world environment for players to explore, including frontier towns, rolling prairies teaming with wildlife, and perilous mountain passes - each packed with an endless flow of varied distractions. Along the way, players will experience the heat of gunfights and battles, meet a host of unique characters, struggle against the harshness of one of the world's last remaining wildernesses, and ultimately pick their own precarious path through an epic story about the death of the Wild West and the gunslingers that inhabited it.

This is a game very much along the lines of Fallout and Skyrim, where you have a set mission line and a huge amount of side quests and jobs that you can do.

You play an outlaw, James Marsden, who is forced to hunt down, capture and kill his old posse. Along the way you get to tame wild horses, join in gunfights and blowing things up with dynamite, quickest hand to the trigger wins etc.

The downfall of this game is that once you reach a certain point in the game play you become a different character. This wouldn't be so bad, except that if you are a keen gamer who wants all the achievements or to get 100% you literally have to reload from an older save and ensure that you don't complete that particular mission.

The online game isn't much to bat an eyelid at, however, buy the zombie add on and you'll get hours of fun, joining up with fellow players to stop the relentless hordes trying to drag you down into hell.

Score: 6.5
Product reviews for listing 5479: Injustice: Gods Among Us -  Developed by NetherRealm

Set in a world where the lines between good and evil are blurred, players will experience heroes and villains engaging in epic battles on a massive scale. A deep, original ... more...