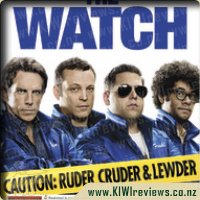 It's male bonding taken to ludicrous extremes! There's trouble brewing in peaceful Glenview, Ohio. That's why four civic-minded citizens, armed with flashlights, walkie-talkies and spiffy new jackets, have teamed up to safeguard their community. But the guys find more than they bargained for when they uncover an alien plot to destroy Earth, and now these bumbling heroes are Glenview's only chance to save the neighbourhood - and the world - from annihilation!

I went to the movies to watch this and luckily I didn't have to buy the ticket it was a radio promotion that was giving away free tickets...because I would have been highly disappointed to see this movie knowing I had to pay money to see it!

I do enjoy watching movies with Ben Stiller & Jonah Hill as I think they are both fantastic comedic actors. I had no idea what the movie was about because I actually went to the movies to see another movie but when presented with free tickets I couldn't pass it up...now I wish I had haha! But the movie did have a few laugh out loud moments as well as having the fear factor of the unknown alien kind.

The storyline was predictable in places and I didn't appreciate the crude, lewd and rude behaviour and language right throughout the movie as I am a tad reserved on some things. The 4 main characters in the movie are a mismatched bumbling bunch of neighbourhood watch buffoons, but that was half the charm of the movie to see what stupid situation they would find themselves in next and how they would get themselves out again.

This is definitely not a movie for young teenagers and definitely not children or people who don't like dirty language or sexual nature of some scenes and I can't believe they put a PG 13 rate on this movie. Not a movie that I would watch again and I definitely wouldn't recommend this movie to anyone!

Evan has created a group for almost everything in his home town, when after a death, he decides to create a neighbourhood watch as he feels he could help the police. What follows is meant to be full of laughs... Well, supposed to be.

Evans team ends up being a total of four guys, all who are in it for different, and some crude, reasons. The end up uncovering a plot for an alien invasion. While, I will admit, there were some good laughs, it seemed that the bulk of the humour in this film comprised of crude, rude and awful sexual innuendo, awful as in the jokes were just plain awful.

The special effects were good and done well. The aliens were believable for what they were. The actors were good in what they did, but provided exactly what you would expect from them and nothing more. Everything gelled together well, but, it did not hold my attention that well, and I found myself at several parts wondering when it was going to end.

Too much crude humour for me, they could have done a heck of a lot better. I do own this, but only because it was something that I won, I would have borrowed it on DVD but never paid to own it.

As the two polar opposites race through Texas they find themselves pursued by everyone from crooked cops to murderous gunmen. But their greatest obsticle to making it out alive may be themselves in this high action, high-hilarity road-trip comedy.