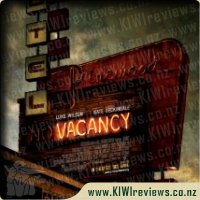 A young married couple becomes stranded at an isolated motel and finds hidden video cameras in their room. They realize that unless they escape, they'll be the next victims of a snuff film

A young couple, having issues with their marriage, end up having car trouble and having to find a mechanic. Their car is taken in and the are forced to spend the night at the motel it is part of due to a part being unavailable. They end up watching a movie in their room only to discover that the murders taking place on film are actually happening in the very room that they are about to spend the night in. So begins their night of horror as they try to survive.

There isn't much call for special effects in the way of explosions etc, but there are some fight scenes so you get blood etc then. The fights aren't huge, but the general idea of someone murdering you and taping it so that they and a small selection of people can enjoy it time and time again is horrifying in itself.

This isn't too bad a film, but nothing amazing and not one that I need to watch often.

It is 1914. As the Great War looms, the vast Ottoman Empire is crumbling. Constantinople (Istanbul), its once vibrant, multicultural capital is about to be consumed by chaos.Michael Boghosian (Oscar Isaac), arrives in the cosmopolitan hub as a medical student determined to bring modern medicine back to Siroun, his ancestral village in Southern Turkey where Turkish Muslims and Armenian Christians have lived side by side for ... more...