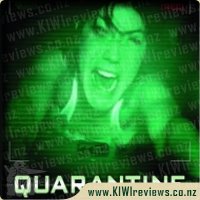 They soon learn that a woman living in the building has been viciously attacked by something unknown. After a few of the residents are also attacked, they try to escape with the news crew in tow, only to find that the CDC has quarantined the building. Phones, internet, televisions and cell phone access have been cut-off, and officials are not relaying information to those locked inside.

When the quarantine is finally lifted, the only evidence of what took place is the news crew's videotape.

Yet another handheld camera movie based upon a foreign film, [rec]. And you know what the worst part about this movie is.... It's that if you watch the trailer, you also end up watching the end of the movie, so there's no surprise to it at all.

The movie starts off quite slow. Our main character is at a fire station, filming for a news report, and hoping that she'll get to ride along on at least one call out for the night, naturally though, with any horror story, she'll come to regret her eagerness to ride along on a call out.

Everything is as you would expect it to be. One person appears to have gone crazy, attacks the others, everyone gets trapped inside and slowly everyone starts to die while you get to feel dizzy as the camera goes everywhere and seems to be shaken more than necessary to make you feel more a part of the action.

There was one pretty big discrepancy in the film, but going into detail would be a big spoiler for the film, but needless to say it made me raise my eyebrows and wonder how stupid the writers were to think that they could get away with it unnoticed. After all, it is a pretty important part of the movie as a whole.

For a borrow movie, this delivers what you would expect, things that go bump I the night, and things that jump out at you to make you scream. Another movie I'm glad I didn't waste money on at the cinemas.