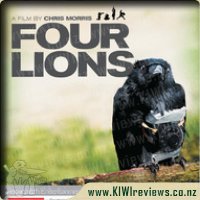 Could there be a more hot-button topic than terrorism these days- Although it is historically the subject of serious documentaries and intense dramatic films, renowned British comedian Chris Morris (The Day Today, Brass Eye) finds the humour (and ultimately the humanity) in this extremist world.

Four Lions tells the story of a group of British jihadists who push their abstract dreams of glory to the breaking point. As the wheels fly off, and their competing ideologies clash, what emerges is an emotionally engaging (and entirely plausible) farce. In a storm of razor-sharp verbal jousting and large-scale set pieces Four Lions is a comic tour de force; it shows that - while terrorism is about ideology - it can also be about idiots.

Based on three years of research and meetings with everyone from imams to ex-mujahedeen, not to mention a wealth of surveillance material from major trials, Four Lions plunges beyond seeing these young men as unfathomably alien or evil. Instead, it portrays them as human beings, who, as we all know, are innately ridiculous.

This is a brilliant movie. It is utterly hilarious whilst at the same time creating such flawed characters (and so very, very competent actors) so as to feel fully believable. The movie follows a small group of Muslim British men who decide to become suicide bombers and their journey from getting along with each other to figuring out just what to bomb.

So often, these days, when you watch a movie, the main character, no matter what their aim, has everything eventually fall in to place no matter what happens during the start and middle of a film. For these guys, nothing seems to be going right, and provides so many laughs. This is one of the funniest movies that I have ever watched and I can't recommend it highly enough.

Big ups to director, Christopher Morris, who spent three years researching for this film, so that it was as honest in the ways that it could be, as was possible. He even sent a copy of the script to a former Guantanamo Bay detainee, Moazzam Begg, to check that it wouldn't be offensive. The actors are flawless, they are superb in everything they do, I'm sure though that there must be an out-takes reel somewhere full of nothing but them laughing, as how they kept a straight face at times....

In a dystopian Detroit, grand houses that once housed the wealthy are now homes of the city's most-dangerous criminals. Surrounding the area is a giant wall to keep the rest of Detroit safe.

For undercover cop Damien Collier (Paul Walker), every day is a battle against corruption as he struggles to bring his father's killer, Tremaine (RZA), to justice.

Meanwhile, Damien and an ex-con named Lino (David Belle) work together to save the city from a plot to destroy it.