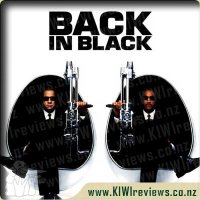 It's been five years since the alien-seeking agents averted an intergalactic disaster of epic proportions. Kay has since returned to the comforts of civilian life while Jay continues to work for the Men in Black, the highly funded yet unofficial government agency that regulates all things alien on Earth.

While investigating a seemingly routine crime, Jay uncovers a diabolical plot masterminded by Serleena, an evil Kylothian monster who disguises herself as a sexy lingerie model. It's a race against the clock as Jay must convince Kay-who not only has no memory of his time spent with the Men in Black, but is also the only person alive who has the expertise to save the galaxy-to reunite with the MIB before Earth submits to ultimate destruction.

The good guys dress in black, remember that
just in case we ever face to face and make contact
The title held by me, MiB

I bet J wishes K hadda remembered the words for that song. Its 5 years since J first met K and joined the MiB, but now J has progressed through the MiB ranks and K has returned to civilisation as he needed to return to the comforts of civilian life. But J needs Ks help, but will K remember anything at all from his MiB days?

Like the first MiB movie I love this one too. It is not often a sequel is as good or almost as good as its predecessor so when it does happen its all rather exciting. In all honestly, the story-line is much the same as the first movie. Recruit a partner, fight aliens, save the world without the world knowing there was ever a problem. Easy!!

This movie has cool suits, awesome music, excellent actors, amazing graphics with lots if great humour and plenty of blowing stuff up. Its fun, entertaining, and a great family movie..

Agent J is back for round two. It's been five years since Men in Black 1 took place and Agent J has a new partner. Agent K decided that he wanted to return to normal life and is now working in a Post Office. When an alien ship lands on Earth, without any proper authorization, J is forced to bring K out of retirement as he is the only one who knows what Serleena, an evil Kylothian, wants from planet Earth.

The tables have turned and this time it is K who doesn't know the world around him and must be reminded of the job that he once did for many, many years. Along the way J meets a beautiful young woman who he begins to fall in love with, he too, has felt the pangs of being alone whilst working for the Men in Black.

Some of the best moments in this film range from J and K fleeing headquarters, to the finale chase and battle scene and Frank the Pug walking around in a little tux (which according to the special features he loved so much that he didn't want it to be taken off him)

This was a good follow up to the first film, great humour, good special effects, and just like the first, keep an eye out for Barry Sonnenfeld.

For 60 years a mysterious monk with no name has zigzagged the globe to protect an ancient scroll - a scroll that holds the key to unlimited power. Now the Monk must look for a new scrollkeeper. Kar is an unlikely candidate, a streetwise young man whose only interest is himself. But when he inadvertently saves the Bulletproof Monk from capture, the two become partners in a scheme to save the world from the scrolls most avid ... more...