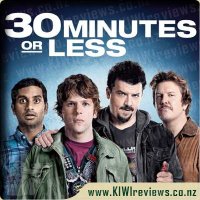 This is one of those movies where you watch the trailer and you're just not sure how good it is going to be. I'm sure we've all seen that kind of trailer, and this was definitely one of those for me.

We have our 'hero' and his only very recently (as in, within the first half hour of the film) ex-best friend working together to rob a bank as two men, who are also best friends, called him out on a pizza delivery job and then knocked him out. When he woke up he discovered a bomb strapped to his chest and he was given his orders to rob a bank, no authorities etc.

I was expecting a very stupid type of comedy with this film, due to one of the actors in the movie. However, the laughs were better than I expected them to be and I did genuinely enjoy this movie. While it isn't the funniest movie that I have watched, it was a heck of a lot better than some I have seen recently.

If you have a few hours to kill, then I would say, watch this, it's a good laugh for a couple of hours, and whilst it isn't mind blowing or anything new, it is a good time waster.

If someone took everything you live for..how far would you go to get it back?

Flying at 37,000 feet in a state-of-the art aircraft, Kyle Pratt's six-year-old daughter Julia vanishes without a trace. Or did she? No one on the plane believes Julia was ever onboard. And now Kyle, desperate and alone and fighting for ... more...