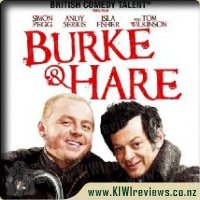 This film is based upon true events, except the parts that aren't... This film is loosely based upon the real life Burke and Hare, who in the 19th century committed murders and sold the bodies to a doctor. It is always interesting to read the real facts behind a movie, but this review is about the film and not true history.

Burke and Hare have fallen upon hard times as has a local medical institution, which thanks to its rival, no longer has a good steady flow of bodies for their autopsy classes. This leads to a partnership of sorts where the doctor will buy bodies in prime condition and in return not say a word to anyone. Here start the laughs as Burke and Hare try to figure out just where they n procure the bodies from, after grave robbing proves to be a failure they turn to the more lucrative business of murder.

Andy Serkis and Simon Pegg do a lovely job playing these two bumbling characters who must deal with Hare's wife, the doctor, the police and the beautiful young woman the Burke falls in love with. Bear in mind that this is a black comedy, so if you don't enjoy laughs centered around murder and dead bodies, then steer clear of this film.

My husband, mum and I thoroughly enjoyed this film, and we picked it up when it was on sale for a very low price. I don't think this is a film for just anyone, as I said, if you can't handle dead bodies in various states then stay away, but if it doesn't bother you then give this film a try.