ProdID: 3769 - About a Boy
Directed by Paul Weitz and Chris Weitz 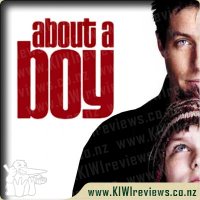 About a Boy product reviews

Growing up has nothing to do with age.

In this fine adaptation of Nick Hornby's novel, Hugh Grant plays Will, a 38-year old Londoner living a bachelor lifestyle on the back of royalties earned from a Christmas song penned by his dad years earlier. A serial womaniser, he spends his days lazing around his designer pad watching TV, and then comes up with the idea of attending a single parents group as a new way to pick up women.

There he invents a two-year old son for himself, and it all results in his encountering lonely, bullied schoolboy Marcus and his depressive, music therapist mother. Marcus soon learns that Will has been lying and so blackmails him into letting him hang out at his place and watch afternoon telly. However, what starts out as an uneasy quiz show watching alliance inevitably turns into a friendship of sorts...

About a Boy was one of those hidden gems for me when it arrived on DVD. My husband knew I had enjoyed several other Hugh Grant movies (I'm honestly not that big a fan!) so he got me About a Boy for a birthday one year. I sat down to watch it, not sure what to expect. But this is again one of my favourite romantic comedy movies.

Grant plays a womaniser, but he is still quite likeable despite the lengths he goes to meet desperate women. At one point early on he is asked to be a godfather to his friends' little girl, He says no and he is quite honest about the fact that when she turns 18 years old he will most likely try to get into her pants. The story is based on a Nick Hornby novel. I haven't read it, but Hornby has had quite a few novels made into films, including High Fidelity.

Toni Collette plays the boy's (Marcus) mother. I loved her in this. She is so versatile. Here she plays a bit of a alternative hippy, who suffers greatly from depression. She seems unable to see the pain Marcus endures to make her happy and is unable to help him in his daily struggles. Lacking practical parental input and in desperate need of a friend, he falls into an arrangement with Will (Grant's character). Both fulfil a need the other has, but the arrangement seems doomed to end horribly as well. This is a really emotional movie, but there are plenty of laughs.

Score: 7.3
Product reviews for listing 5007: Bend it Like Beckham -  Directed by Gurinder Chadha

The daughter of orthodox Sikh rebels against her parents' traditionalism by running off to Germany with a football team.