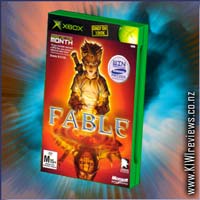 Disclosure StatementFULL DISCLOSURE: A number of units of this product have, at some time, been supplied to KIWIreviews by the company for the purposes of unbiased, independent reviews. No fee was accepted by KIWIreviews or the reviewers themselves - these are genuine, unpaid consumer reviews.
Available:
14th October 2004

FOR EVERY CHOICE, A CONSEQUENCE.

Imagine a world where every choice and action determines what you become. Where you evolve in realtime based on every little thing you do. Introducing Fable, an RPG action adventure unlike any you've ever dreamed of.

Evolve in realtime: Will you fight for honour and justice, or betray the people? Remember that it determines how you look and how others react to you.

Never the same game: Like the real world, your decisions allow you to become a different person; be it Hero, Villain, or anything in between.

Building a living legend: Through deeds and actions, players build a name for their character across the land, make friends and enemies, the whole time interacting with a living world of people, places and events, all reactive to them.

I really liked the premise of this game, the idea that your character developed and that your choices actually made a difference to the way the AI treated you. That has been a feature of RPG that has been a long time coming and still has a way to go, but it certainly made this one stand out.

At the same time, from the point of view of a female player, it was sort of annoying that you could only play as the one guy. The things I thought would be amusing, buying a house, wooing a partner, just seemed well... disturbing. I guess it was just hard for me to identify with the main character, good or evil. I eventually just resigned myself to watching my brother play. He's better at these sorts of games anyway. (Having said that, I am excited about Fable 2 which does allow gender selection at the beginning of the game... yay!)

Still, from a techincal point of view, the graphics were lovely and the gameplay was smooth and relatively intuitive. I liked the ease with which you could swap between melee and ranged weapons, and then throw in a little magic when you were getting into trouble. The early quests were fun and relatively easy to complete, good for building momentum. All in all, a very well made and intelligent game - for its target market =P

I have always found 1-player hack'n'slash games to get rather dull rather fast, but this game just has that X-factor in spades! With EVERYTHING you do becoming a factor in your overall character development, not just the things you do, but also how fast you do them, in what order, etc... it's all just stunningly fluid!

After 5 hours of playing as a 'Good' character, I was a fair way along the game, but still only just starting. 3 quests down, very high Reknown, lots of gold and trophies, and quite a few enhancements... and I still felt like a kid. So, now to see the other side of the coin. So, new character, choose all the 'Evil' deeds, slack off and walk around in a crisis, run away from duties, kick every chicken I can see (earning me the nickname Chicken Chaser) and basically be as much of a git as possible. After 3 hours I had almost been kicked out of the Guild of Heroes twice, I was totally unwelcome in the nearby towns, and any Guardsman who saw me was on me like a tonne of bricks. Wheeeeeeee! Run, naughty boy, RUN!

The differences in opportunities between a 'Good' aligned character and an 'Evil' aligned one was subtle in places, not at all subtle in others. Bad guys earn more money, but usually have to hand most of it over in fines and penalties if they get caught, whereas Good guys get to keep more of their earnings, but tend to earn less. Crime DOES pay, but only in the very-short term.

There were LOTS of hidden bits throughout the game, so watch out for ANYTHING that glows, even faintly. It will be something you can interact with. Green glow means 'This person will tell you useful things', purple is 'General banter, can be ignored', blue is 'This thing can be interacted with and might be useful', yellow is usually 'Food', red means 'Kill it, KILL IT NOW!', etc.

I was a little disappointed that despite the highly variable plotline, there were certain key plot-points you had to pass through. Despite my best efforts, I HAD to give my sister the chocolates in order to get past stage 1, but that trader sure got a good smashing, which lowered my alignment enough to compensate for the 'goodness' of the gifting. Where's the 'Eat the choccies in front of her instead' option guys? :)

The only major gripe I had with the game was the camera control. It was by pure accident I found that pulling both L&R triggers I could re-center the camera behind my character (Thanks to playing Ninja Gaiden it was a reflex action that happened to work.) - however due to the fully-packed nature of the controls, I simply couldn't do melee combat effectively while trying to handle the R-joystick to keep my opponents in clear sight at all times. It made things a little awkward, and I ALMOST ran out of lives during some of the later combats... but it did actually add some extra thrill to it in places. There's nothing quite like crawling away from a bbattle as the last (barely) survivor to remind you how nasty some of the critters can be. Halleluyah for fireball spells!

Overall... I'm hooked. It would be worth buying an Xbox JUST for this game alone! I have 3 characters in play at present, one fully 'Good', one fully 'Evil' and one who's just all over the place. Be interesting to see who goes where. :)

Race to escape the feeding frenzy!

Escape the jaws of the piranhas!
It's a slippery race upstream while you try to get the other players hooked... and eaten! But watch out. Those hungry piranhas are ready to attack any which way they can!
Who will survive?