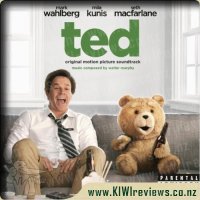 Disclosure StatementFULL DISCLOSURE: A number of units of this product have, at some time, been supplied to KIWIreviews by the company for the purposes of unbiased, independent reviews. No fee was accepted by KIWIreviews or the reviewers themselves - these are genuine, unpaid consumer reviews.
Available:
on DVD and Blu-Ray

As the result of a childhood wish, John Bennett's teddy bear, Ted, came to life and has been by John's side ever since - a friendship that's tested when Lori, John's girlfriend of four years, wants more from their relationship.

My husband and I sat down to watch this film last night. He had no idea what to expect and I had read these reviews so was pretty sure I knew what to expect. Now, I should say that he is a huge fan of Seth McFarlane. He watches Family Guy and American Dad. We even own them on DVD. I personally find that kind of humour difficult. I laugh, but I hate myself for laughing. It's funny but deeply un-PC.

This movie is all of those things. If you are a child of the 80s then this will give you moments of recognition. The Tiffany video, took me back to standing in front of RTR dancing. Flash Gordon references brought back other vague memories too.

Ted is voiced by Seth McFarlane. He sounds exactly like Peter from Family Guy. They even comment on it at one point, so breaking the fourth wall. "Hello, you are watching us and we know it". That breaking of the fourth wall is totally normal for McFarlane's humour.

Basically if you like Family Guy, or if you like the Hangover movies - that type of humour - then this movie will suit you down to the ground. I did enjoy it for what it was. My husband had no complaints whatsoever. If the idea of a lovable looking teddy swearing, screwing and doing copious amount of drugs disturbs you, don't bother with this.

Not long after this movie was released my partner came home from work raving about it (from all the talk from work mates) and that we simply must go see it. I secretly groaned as I had seen the trailer and wasnt the slightest bit interested but agreed to go all the same (I owed him for watching a few "girly" movies).

We went to the movies the following Friday night and the cinema was pretty much full - so it was definately popular in terms of people paying to go see the movie. A little boy who makes a wish (which comes true) means his teddy comes to life... Fast forward a few years and the main character sits at home drinking too much, fails to go to work and failing big time in his relationship with his girlfriend. Amongst it all he eventually grows up - making choices between his girlfriend and his "Ted".

I have to say that I enjoyed this movie way more than what I had gone in expecting! I had a few laughs and in general it was a movie I enjoyed seeing. Like others have noted it was quite a long movie for such a simple story line, however at the time in the movie theatre I didnt notice (it wasnt until it had finished and I looked at my watch that I realised). While I certainly wouldnt pay to see this movie again, I would probably watch it again if it screened on tv or someone else owned it.

Well this was a movie that i had heard so much about, people saying its a great movie and well worth the watch, when I told them I dont like family guy (the guy that creator family guy and this movie) I was told you will still enjoy this movie. So while in the DVD shop i brought this one with others.

While my son was asleep I decided to watch it. When you turn it on it asks if you want the extended edition or not. I chose not in case my son woke. Yes its R 16 and for a really good reason.

It all starts out nice with a boy making a wish on xmas day after getting a bear. As the boy grows the bear does too and they stay together forever. The story follows them around with their highs and lows, doing drugs and more adult things. With John juggling his forever friend and girlfriend the story goes on.

To be honest I thought it was too long, I didnt laugh as much as people were saying I would and honestly I have brought the DVD and I will be selling it, as i will not watch it again. If you're not a fan of family guy then this really isnt a movie for you

Well, this was one of those movies that I had heard a lot about. Everyone who mentioned it said it was really really funny and well worth seeing. So, we borrowed it overnight, sat down with some chips and put the movie on.

Now, in itself it's not too bad of an idea for a film. Due to a wish as a child, that brought his teddy to life, our main character is now a bit of a slob who drinks to much, keeps calling in to work sick and failing where it matters most when it comes to his relationship with his girlfriend.

Eventually, he has to grow up, and of course this is the 'heart' of the story, can he grow up yet still keep everyone that he loves in his family. I did find though, that it did end up dragging on for too long. The movie is 106 minutes long, but in all honesty, I would have been quite happy with just a 60 minute film.

While I did watch the movie to the end, and yes, I did laugh a couple of times, however, it didn't hold my attention at all, and I ended up reading some of a book during the film. Not a movie I would ever care to watch again.

Desperately bored with his duties as a Detective Sergeant, Bruce (McAvoy) survives on a mixture of ... more...