Home > Categories > Books > Fiction > You Are Not Here review

ProdID: 3748 - You Are Not Here
Written by Samantha Schutz 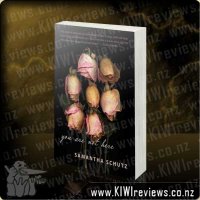 You Are Not Here product reviews

Annaleah and Brian shared something special - Annaleah is sure of it. When they were together, they didn't need anyone else. It didn't matter that their relationship was secret. All that mattered was what they had with each other.

And then, out of nowhere, Brian dies. And while everyone else has their role in the grieving process, Annaleah finds herself living outside of it, unacknowledged and lonely. How can you recover from a loss that no one will let you have?

I felt drawn to this book as I am still in the grieving stage of losing three loved ones just over a year ago. I sort of hoped this would help me, but to be honest I was a bit disappointed. Yes I am a middle aged woman but in this instance I will take all the help I can get.

The feelings in the book were very raw and real, so real I could pick up on some of my own. What I found hard to cope with was the writing style. It is written like a poem. By that I mean, you don't have full sentences as we know them. You have 4-6 words per line, with around 6 lines per paragraph, this I found very hard to read. It also to me made it very hard to follow the story, some "chapters" were only a maximum of one page long. This type of writing may appeal to younger people, who the book is aimed at, and it might be a great way to get non readers suffering grief to read something about it, but for most serious readers I don't think it will be one they will refer.

As I have already said this is about grief, the story is based around two teens, who fall in love as only teens can do. One day Annaleah finds out from her friend, that her boyfriend Brian has suddenly dropped dead. She had only just met him & he hid her away, so she cannot openly mourn his death. Life carries on as normal around her and she finds it hard to cope. Once Brian is buried she spends most of her time by his grave willing and wanting him to come back to her. Slowly as time passes, she discoverers she is still alive and she is allowed a life, a life without Brian.

As I have said I am not sure if I would recommend this as it is hard to read and the story is hard to follow, but if it helps someone then the book has done what it was meant to do.

I have never read a verse novel before so reading this book was an experience in itself. With You Are Not Here being written in this way it was a very fast read...I managed to read from cover to cover in a few hours. This is a novel about the loss of a loved one, and ultimately moving on once the main character has worked through her grieving process.

Annaleah's relationship with Brian was complicated, but all teenage relationships are! From what was written within the book the reader finds out that Brian may not have felt the same way that Annaleah did. I found as I read through the book I was becoming more and more frustrated and mad at her for being so naive, yet at the same time it's easy to see how being in love can blind you, and especially at the age of 17!! I did think that the depiction of the grieving process was done extremely well, we all grieve the same but in our own ways, whether you are 17 or 97. I felt and could relate to Annaleah's hopelessness flowing off the pages as I read through the book, which I am sure anyone who has suffered the loss of a loved one could easily relate too.

Perhaps it was the novels prose but, I felt a distance from all of the characters, probably because they are all based on teenagers and they are half my age, and yes I can remember being a teenager (all-be-it many a year ago now heehee) but never had to deal with death of a loved one at that age, and never really got into the petty friendships that were depicted within the book, losing friends because you choose to be a boy over a friend you have known nearly all your life.

That being said, I must say for not having read any of her other books I think that Samantha Shultz is a very talented writer and I enjoyed reading You Are Not Here overall, with its poetic nature. I didn't think much of the cover though; not very eye catching, with a withered bunch of roses on a black background. The size and font of the writing was perfect, easy to see and read with short paragraphs.

An emotional and fast read, You Are Not Here by Samantha Schultz is a beautiful story of love, of loss and of forgiveness, by having the option to imagine an ending that allowed the main character to live happily ever after fairytale ending if that is what you wish to imagine. It did end in strange manner though but it showed us that Annaleah was moving on and was back to 'normal' after the loss of her boyfriend.

What if the world around us is just a computer simulation? Could the dinosaurs have died in a nuclear war? Did hallucinogenic drugs make us human? What if we've already found extraterrestrial life?

Welcome to the curious scientific subculture of weird theories. Thoroughly bizarre and contrary to the established norm, these ideas are often vehemently rejected by the intellectual community. From the creation of the universe to the ... more...