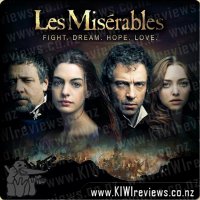 Disclosure StatementFULL DISCLOSURE: A number of units of this product have, at some time, been supplied to KIWIreviews by the company for the purposes of unbiased, independent reviews. No fee was accepted by KIWIreviews or the reviewers themselves - these are genuine, unpaid consumer reviews.
Available:
in cinemas from 10th January 2013

In 19th-century France, Jean Valjean, who for decades has been hunted by the ruthless policeman Javert after he breaks parole, agrees to care for factory worker Fantine's daughter, Cosette. The fateful decision changes their lives forever.

I have wanted to see this movie for ages especially when I heard about how many awards it was nominated for. Hollywood made such a big deal during the Oscars that it was on my 'must see' list.

I am actually shocked that Anne Hathaway won the award for best supporting actress. I expected her to be in the whole movie, not for all of 10 minutes. Yes she was convincing in her role but for the short amount of time she was on the screen, I can not believe all the buzz she received. I had also heard terrible things about Russel Crowe's acting and his voice, but I have to say I really enjoyed his voice - much better than Hugh Jackman's.

Absolutely loved Sasha Baron Cohen and Helena Bonham Carter's roles, they brought some comic relief to a movie that would otherwise have been dark and depressing. Their singing was fantastic and the facial expressions let you feel the songs' words.

If you do not like musicals you will not enjoy this movie. It is completely done in song. A large portion of the songs are not that fantastic but every once in a while they hit a winner and your heart misses a beat as the cast sing away. I absolutely love when a couple of them sing different songs to different music and different tone levels - it's amazing. You feel so emotional and you are totally mesmerized. I love how a movie can do that. I love the emotions that it brings out in you.

I thought the star of the movie was Samantha Barks - a cross between Mandy Moore and Kelly Clarkson - a fantastic voice and great acting. Actually the whole cast was well portrayed and I enjoyed all of their singing.

I just have to remember not all movies live up to Hollywood hype.

After seeing my aunt in a performance of Les Miserables as a teenager, I was itching to see the big-screen version of the production. I had heard great things of Anne Hathaway's voice, and the dynamic of Hugh Jackman as Jean Valjean.

The film moves on at a cracking pace and tells the story of each character in slightly more detail than a stage production would allow. Having the actors sing on-stage as opposed to miming a soundtrack added to the gritty feel of the performances and, along with the set design and musical score, the film draws you in and makes you fight along with the fighters and cry for the lost and unfortunate.

Despite hearing reports to the contrary, Russell Crowe's voice was actually suprisingly good! I thought he did justice to Javert's character. His departure from the film a little bone-shattering for some in our theatre... As for Hugh Jackman? Playing an ageing ex-slave is one thing; singing with such conviction as he ages on screen is something quite remarkable. And Ms Hathaway... she is a delight. Such talent! Not nearly enough screen time.

LOVED the barricade scenes! The piles of wood and furniture was just like how I remembered the largest prop on set at the Founders Theatre. Whoever designed that set clearly did their homework. The battle scenes with their rousing chorus to fight pulled at the heartstrings. Had I a musket and some red fabric, I may well have jumped from my seat shouting "Vive Le France!"

The only let down for me was the Innkeeper and his wife - played by typically grotesque Helena Bonham Carter and odd-man Sacha Baron Cohen. I don't actually recall their parts in the stage production, but in the film they were just awful. A cutaway of Family Guy proportions in terms of narrative and overall style.

Take tissues - mascara does not bode well during this film. A stunning effort. I shall be going again!

Having seen a very high quality stage production a few years ago, I was pretty confident I could recall the storyline well enough to keep up. What I wasn't expecting was that the cinematic version really made the story so much CLEARER than the stageshow did. I was able to easily work out so much more of the plot this time around, and for the first time it actually made complete sense!

Seeing Hugh Jackman - who has a background in musical theatre - and Anne Hathaway - who I have heard sing in other movies - had me hoping for some stunning songs... Anne gave some amazing performances, but much to my horror Jackman's singing was, on the whole, rather horrible to listen to! Wolverine, stick to howling and snarling buddy. Though a subject of some disagreement, I also found a lot of Russell Crowe's singing to be unpleasant - way too high pitched for the character, more than anything particularly bad about it. A gendarme should have a deeper, masculine voice, even in song - well, that's how it stuck me at least.

STUNNING performances from Samantha Barks as the older Eponine, Daniel Huttlestone as young rabble-rouser Gavroche, Isabelle Allen as the young Cosette, and quite surprisingly from Colm Wilkinson as the Bishop. This last character really got to me in a way I wouldn't have thought possible from a small-part character. I find myself at a loss to explain exactly why, but I was having trouble not choking up during the scene where Jean Valjean was dragged back into the church after stealing the silverware.

Speaking of emotional overflows... I am not ashamed to admit that the end of the movie had me in tears. The scene where Fantine is dying was hard enough, but the final scenes with Valjean, Marius and Cosette had me weeping like a child... and I doubt there was anyone in the cinema over the age of 20 who had dry eyes. The poor lady next to me was crying so hard she was having trouble breathing at one point!

This is NOT a family movie really... taking Mr12 along, and listening to the not-so-quiet complaints from other teens present in the cinema (mostly the males, unsurprisingly) proved that. It contains a lot of very "mature" themes that are disturbing, or boring, to the younger set... so, unless they have a pre-determined attraction to musicals and depressing themes, then it may be wisest to schedule a session for when they are otherwise occupied.

Overall, a very good movie, spoiled only in a few small places by some erratic singing that had disjointed rhythm mainly, and a bit of decidedly bad acting by the two prime culprits - Sacha Baron Cohen and Helena Bonham Carter as the larcenous inn-keepers, the Thenardiers, erstwhile carers of the child Cosette until Valjean rescues her. Their almost slapstick performances were a notable notch or three below the quality tone of the rest of the movie.

Based on the New York Times bestseller, WONDER tells the inspiring and heartwarming story of August Pullman. Born with facial differences that, up until now, have prevented him from going to a mainstream school, Auggie becomes the most unlikely of heroes when he enters the local fifth grade.

As his family, his new classmates, and the larger community all struggle to find their compassion and acceptance, Auggie's extraordinary journey will unite them all and prove you can't blend in when you were born to stand out.