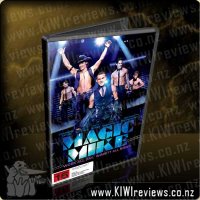 Disclosure StatementFULL DISCLOSURE: A number of units of this product have, at some time, been supplied to KIWIreviews by the company for the purposes of unbiased, independent reviews. No fee was accepted by KIWIreviews or the reviewers themselves - these are genuine, unpaid consumer reviews.
Available:
November 2012

To a rebellious 19-year-old kid looking for independence from his family, Magic Mike seems like the perfect role model: he's got a nice car, a nice apartment and a seemingly endless supply of women. What's his secret? He's a male stripper, and when the kid dives headlong into Magic Mike's world, his mad dancing skills and hunger for excitement make for an unforgettable summer...

I had heard so much about this movie some good and some bad so of course I had to see it for myself, I expected sexy naked men and not much else and that is more or less what I got. It started a bit slow for my liking but once the dancing and naked men started then it caught my interest (well I'm a hot blooded woman and I will notice sexy half naked men) but not enough that I would watch it often.

The choreography is well done. I did notice that you never saw anything really as they always had at least g strings on so you did get to see bums but nothing frontal, it was a good change from the naked women that does seem to be in a lot of movies.

I did enjoy the music and eye candy.

"I went to see Magic Mike for the plot, said no woman ever" perfectly sums up this movie for me. Yup, there was some decent choreography, and plenty of near naked men (if that's your thing) but the plot, well the plot sucked, and well, it just wasn't that great of a movie.

A guy meets Mike, through work, and finds out that on the side, Mike is a male stripper. After being helped into a club by Mike, The Kid agrees to help Mike out and ends up returning to Mike's place of work, and ends up joining the team and becoming a stripper. Mike falls for The Kid's disapproving sister, and of course the potential for a relationship begins to develop. There's sex, stripping and drugs involved, and Mike trying to figure out what he wants to do with the rest of his life.

We have a couple of moments where the month flashes up on screen, I guess it was to show how fast everything happened, but to me it needed no place in the film, no other reference to time (that I can remember) was made, and it just made the film seem more disjointed. It jumped about quite a bit, to me, going from the stripper life-style, to Mike and his attempt at a normal life separate to his work life.

There was the attempt at drama through his work, friendships and hoped for romance with The Kid's sister, but to me it felt too forced and didn't quite seem genuine enough to feel like anything other than bad acting. Now, I do like Channing Tatum, but in this movie, he sucked.

I think, about the only time that I would ever watch this again, would be at my friends hen party, and even then it would only be for her. Sure, seeing half naked, decent looking guys was nice, but the movie would have been better had there been less stripping and more work put into the dialogue/script/plot.