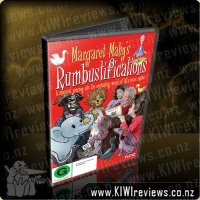 Disclosure StatementFULL DISCLOSURE: A number of units of this product have, at some time, been supplied to KIWIreviews by the company for the purposes of unbiased, independent reviews. No fee was accepted by KIWIreviews or the reviewers themselves - these are genuine, unpaid consumer reviews.
Available:
November 2012

Margaret Mahy was famous for reading her work to children but the enchantment of those readings has never been recorded and made available until now.

Yvonne Mackay, long time friend of Margaret, approached the Hans Christian Anderson award winner and completed the timely, unobtrusive yet intimate photography of Margaret at home in Governor's Bay reading a selection of her poetry and favourite stories to her grandchildren, pets and with her characters who step out of their stories and into Margaret's living room.

Margaret Mahy's Rumbustifications is a seamless mix of live action and post-production animation and sound design. This collection preserves the creative legacy and honours the magical memory of one of New Zealand most well-renowned writers for children and families now and in generations to come.

I recently won a copy of this DVD. Its one I was really keen to get and would have purchased it eventually if I hadn't won it. I love Margaret Mahy, and grew up with her tales. She was and is my favourite New Zealand author, a household name despite her death this year. At her death, I sadly looked around my daughter's book shelf and realised with horror that we owned nothing by Mahy. So getting this DVD was amazing.

The DVD menu is very simple. You have the option to play all, or you have three pages of stories you can select from. If you select one at a time it only plays that story. This is excellent because sometimes if it plays on, then you have been watching the DVD longer than you meant to have the children in front of the TV. I can say "one story only" and mean it because it returns you to the menu.

The most awesome thing for me, is this is actually Mahy reading out her stories. She is such a character, and reads with such passion its a delight to watch and to listen to. She drew both of my children to her with her lyrical way of reading. And actually that's the magic of this. Listening to the stories as they were meant to be read. In the true author's voice, as she would have imagined it to be read by parents and children alike. The computer animated cartoons added, do bring some of the story to life. I especially liked this on "Down the Back of the Chair", watching all the things spring from the chair was enchanting. Other illustrations used were always appropriate, and fun. We have been watching this all week, its such a treasure.

I absolutely loved this DVD showcasing a great collection of some of Margaret Mahy's most well known stories and poems. It was amazing to see the Author in her own home with her own grandchildren and pets reading the stories for herself. I think it is great that you can hear the stories read the way that Mahy herself would of read them that way you get to hear the way she would pronounce things and voice characters.

The first story read on the DVD was my favourite "A Summery Saturday Morning" it was fantastic how Mahy told how the story came to be written and the re-enactment with the animations and her own grandchildren and pet walking along the shoreline brought the story to life. I also loved "Down the Back of the Chair" the animations where great with all the things flying out the back of the chair as Margaret read the story to the children until the lounge they were sitting in was full of objects that were hidden down the back of the chair.

Some of the stories were told using the actual pictures from the storybooks themselves and some were told with animations on screen and it was a good mix of the both. My favourite story of Mahy's was on the DVD "The Three Legged Cat" which I played to my son as we don't have the book of this story and he really liked it watching the screen for a total of 5 stories.

I think it is a great idea to have a collection of stories like this on DVD for children to watch. My 10 year old really enjoyed taking it to bed and listening to the stories as she went off to sleep. We are going to treasure the DVD for years and it is fantastic that a DVD like this is available so children can continue to hear Mahy herself read her stories aloud. 10 out of 10 this was a real pleasure to watch and put a smile on my face.

The Fall, a UK BBC crime drama TV series on DVD, starring Gillian Anderson as a Metropolitan Police detective drafted to Belfast to help on a puzzling murder case. Though her superiors aren't convinced, Stella Gibson (Anderson)'s in­vestigations lead her to believe that a serial killer is at work.

Gillian Anderson and Jamie Dornan reprise their roles as DSI Stella Gibson and Paul Spector in the second series of The Fall. Picking up where series one left off, Gibson continues her hunt for the killer who hides in plain sight.