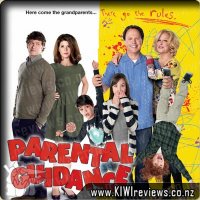 Disclosure StatementFULL DISCLOSURE: A number of units of this product have, at some time, been supplied to KIWIreviews by the company for the purposes of unbiased, independent reviews. No fee was accepted by KIWIreviews or the reviewers themselves - these are genuine, unpaid consumer reviews.
Available:
in cinemas from 26th December 2012

Artie and Diane Decker are called in by their daughter to help care for their three grandkids. When their old-school methods of parenting collide with their grandchildren's hyper-scheduled way of life, the once-orderly household spins out of control, and they must use some unexpected tactics to help teach their grandkids how to act like kids.

After ready seeing the previews on TV and reading the reviews on KIWIreviews I knew I had to go and see Parental Guidance. My husband thought he could tolerate it so agreed to take me on a rare date. I expected to laugh through the movie but I didn't expect to be crying too.

Going to the movies in the morning on New Years Day we had the whole theatre to ourselves. This was great as we were able to make comments through out the movie and enjoy our kid through time. I did feel I did a lot of reflecting during the movie about mine and my husband's parenting style along with how different our parents had been with us. It also got me thinking about how hard it is for grandparents to respect their child's wishes when caring for their beloved grandchildren.

This is essentially a movie about a family all with issues. The grandfather (Billy Crystal) has been fired from his job but too proud to tell daughter. The grandmother (Bette Midler) desperately wants to bond with her only grandchildren. The daughter, who hasn't had much to do with her parents since leaving home, and her three children: the perfectionist; the wimp; and the one with the imaginary kangaroo. The minor characters are all very strange.

The movie went very fast for me and had some very memorable moments. The grandmother had a very important piece of advice for her daughter which I will be taking - "When your children all grow up and leave home it is your husband that will stick around. You need to be there for him and show him you value him."

When I first watched the trailer I thought 'Yup, this looks like a fun movie with some decent laughs in it'. Well, I was wrong. It was a great movie, lots of funny moments in it and a real heart to the story, and it felt more genuine than most of the family movies that I have seen recently.

You have your basic family, Mum (Alice), Dad (Phil) and their three children Harper, Tucker and Barker. When Phil is called to go away for a week, and Alice wants to go with (having not had a break in 5 years) they call upon the grandparents, but his parents first. When that doesn't work out, with some reluctance Alice and Phil call up her parents, Artie and Diane, and ask that they come and babysit for the days that they will be out of town.

The one thing I really liked about the movie, is that whilst filled with many an opportunity to laugh and a great range of them from clever to silly, this movie has a lot of heart to it. Each child has their own problem that they need to figure out, as well as the strain and lost relationship between Artie and his 'little' girl, Alice.

I found this to be a really well rounded film, one that seems to be missing lately in movies. It didn't overdo any of the comedy, nor did it drag out or shorten the key moments in relationships at any point. I'd go so far as to say that I would happily own this on DVD. It was a fun, heart-warming movie.

Watched the trailor of this movie and it looked great, looked full of laughs and i love movies that make me laugh. A normal family with a Mum (alice), Dad (Phil) and their three children Harper, Tucker and Barker.

Parental Guidance is great for most ages, but I wouldnt take my under 5's to see it - they wouldnt understand it. The music in the movie was great had me tapping my foot and the storyline was great, couldnt of asked for anything better really. This shows real family life and what happens. Two uptight parents trying to be the up most prefect you can be, no sugar for kids, kids don't play outside and a house where it does almost everything for you.

When the parents need to go away since they hadnt had a hoilday in 5 years, they call in some reinforcements of the grandparents and it all starts. Artie and Diane hadnt seen their grandkids in 10mths and jumped at the chance to watch their 3 grandchildren. When the rules started, the daughter didnt want to leave to go away for 5 days so made excuses, this was funny as more disaster stirred while she was hanging around watching over her parents, while they did the best job they could with her rules. Once Diana got her daughter to the airport the fun began, the rules were tried to be kept but really went out the window with Artie teaching the kids different ways of coping with their problems, and the grandmother helping Harper find her inner voice.

I really enjoyed Artie and Diane they were fun loving grandparents with hiccups along the way, in the end everything was sorted out and it all worked well..I loved this movie because it really shows family life, not a perfect family and hard to relate to, this one was good to relate to. It had me laughing, feeling sad and a few other emotions, one movie i would happy buy and watch again and again

Danny Madigan knows all the first 3 Jack Slater movies in and out. The 4th one is just about to be released too, and with a magical ticket Danny really gets to know that movie in and out too, literaly speaking. During one of the action climaxes Danny is transported into the movie, into a world following other rules than the real one. Benedict, one of the evil guys, gets hold of the ticket and escapes out to the real world, a world where evil ... more...