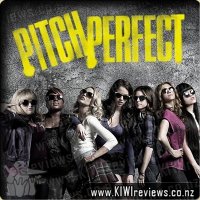 Disclosure StatementFULL DISCLOSURE: A number of units of this product have, at some time, been supplied to KIWIreviews by the company for the purposes of unbiased, independent reviews. No fee was accepted by KIWIreviews or the reviewers themselves - these are genuine, unpaid consumer reviews.
Available:
in cinemas from 29th September 2012

Beca (Anna Kendrick) is that girl who'd rather listen to what's coming out of her headphones than what's coming out of you. Arriving at her new college, she finds herself not right for any clique but somehow is muscled into one that she never would have picked on her own: alongside mean girls, sweet girls and weird girls whose only thing in common is how good they sound when they sing together acapella.

Welcome to the modern day greaase. Like so many music/singing movies before this, the characters are faced with trials, being unaccepted and stereotyped and still manage to make it through and come out on top. My personal favourite scenes in this movie are where the station manager shows his stomach and what female wouldn't love to see that, and where the magic guy gets to sing in front of everyone.

I think the casting is very well done and I look forward to seeing who they cast when they make another pitch perfect. I also question if the silent girl comes back and actually talks at an audible volume. Bumper, while easily the most annoying character in this, has to feature otherwise the story just wouldn't work.

Cinemas in my opinion are horribly over-priced, hence the 7 to pay to see it again but it is definitely one of the more worthy ones :)

Pitch perfect never really grabbed me and nor did I have an interest until after I started watching it. It is now one of my most watched movies and no doubt will be in a few years taking pride of place in my classic collection along with other such greats like Xanadu, Grease and The Best Little Whorehouse in Texas.

Having heard so much about this movie could not wait to see it. Staying with the inlaws we needed a good family movie that would cater for all ages so thought this would be great. Ages ranged from one to much older and it had something for everyone.

Beca's dad makes a deal with her if she can join one group and make friends and experience the college life then she can drop out of college and move to LA with his blessing. Joining the dysfunctional group The Barden Bellas she turns them from a so so group to something impressive. Fat Amy the best singer from Tasmania with teeth, definitely steals all of the scenes and her voice is fantastic.

Love the sarcasm through out especially from the commentators. Elizabeth Banks (also the producer) along with fellow commentator John Higgins are so funny. The one liners are classic 'Nothing makes a woman feel more like a girl then a man who sings like a boy'. Not to mention the snipes Fat Amy gets in when she has the chance. Major let down to the movie is the fight scene resulting in a huge vomit and Lilly (very quiet talker) making snow angels in it. Totally gross.

Sort of movie you can rewatch and still enjoy it. Actually find the more I see it the better it becomes. Looking forward to the sequel coming out soon.

I have given this an all round score of an 8 although my daughter said she would give it an all round ten so I would say it does appeal to young girls more than it may appeal to the older generation. With the school holidays we have been watching a few movies and this was one of the ones picked this week to watch as a family (my 11 year old's choice of course).

When the movie started my first thought was oh great it is going to be very glee like and I really don't like that show but as it continued I actually found myself getting quite into the movie. My partner however disappeared out to his man cave within about 15 minutes saying he couldn't stand it. My daughter loved it and has watched every night this week before going to bed as well as listening to the snippets of the movie on youtube.

I'm not a great fan of musicals but this did have some good music and the Bella's had some funny sequences that made you laugh, their performances were very choreographed and were pretty entertaining. I quite enjoyed the battles they had with the treblemakers and the singing was pretty good actually although some of the solo voices I didn't like so much!

Pitch Perfect is about an acapalla all girls group who, last year, had their performance at the finals go horribly wrong. This year, determined to do better, they pushed Beca into joining their ragtag group of singers.

I hired this as I usually enjoy 'musicals' and a mix with comedy is usually a winner. There is plenty of opportunity for laughs in this, though I do feel some are pathetic (like the joke around the rape whistle) but that's me. Most of the jokes though got the laughs that they were trying to get.

The songs were fun, and there were some great mixes which I really enjoyed, and there is one or two that I may look at getting for my music collection. The choreography and music went along wonderfully and there was a great mix of recent hits and older songs that my mum knew.

This was a fun movie, I didn't enjoy it as much as I thought that I would, but it was still a fun movie and I will watch it when it comes on TV in the future.

I have to be honest, I am NOT the greatest fan of musicals... my worst nightmare of being tortured involves being stuck in a room, unable to shut off the TV, while "The Sound of Music" and "West Side Story" take turns on endless loop play. So, going to see a movie about American college students singing acapella... well, it wasn't huge on my list of "probably going to like this". But, the rest of the family wanted to see it, so hey, I can take one for the team... and at least I knew it was going to be comfortable to watch, since it was in the Hoyts Te Awa complex.

I basically spent the first quarter of the movie cringing and squirming in sympathetic embarrassment as awkward moment is piled upon awkward moment... and I find myself utterly relieved that I never went through College in the States.

I don't think I could have handled the burden of social clique as portrayed in this movie...

Having first seen Anna Kendrick as the somewhat ditzy assistant to George Clooney's character in "Up in the Air" I was impressed by her "understated rebel" portrayal here... as a 25 year old, she managed to pull off the angsty late-teenager stuck in an educational establishment against her will, thanks to the decisions of Dad, a teacher at said college. A plausible twist on a familiar trope, and well executed.

Some great acapella, slightly ruined by bad lip-synching in places where the lips slid around the tunes, sometimes ahead of the soundtrack, sometimes a fraction behind... enough for a continuity-error-hunter like me to spot, but not significant enough to be noticed by anyone just kicking back and enjoying the movie.

Overall, this was actually quite a pleasant surprise for me. Not sure I agree with casting Rebel Wilson in this - I have never been a fan of her, or of the majority of Australian comics - but the character had to be there, and she at least fit the bill. Some great songs, which had me spending the weekend trawling through YouTube for some artists I had only ever heard of briefly and never paid much attention to - David Guetta and Sia as prime examples - so if nothing else, this movie may expand your listening range a bit.