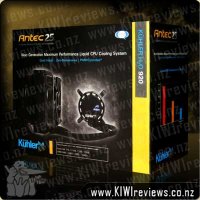 Lastly, the included software helps you monitor and control the KUHLER H2O 920's performance and allows you to customize its stylish RGB LED. Designed to unlock the maximum potential of your CPU, the Antec KUHLER H2O 920 delivers exceptional cooling when you need it the most.

I have built a lot of machines over the years and the one thing that always stays at the top of the caution list is anything that involves cooling the CPU. Back when I was a kid the CPU was just another chip soldered directly on to the motherboard. If you wanted a more powerful processor, you bought another computer. This was mainly because back then everything was designed to work together just the way it was built. In most cases, you couldn't even give the system more RAM without buying fancy expansion cards that slotted into the motherboard and piggybacked over the top of the existing RAM. Then systems started to become more modular, and it was time to look at using a socket for the CPU because faster and more powerful chips were coming out often enough that people weren't keen on throwing out entire functional systems just for a bit more grunt.

As chips got more powerful, ran faster, and used higher clock speeds, more energy was being used, which means more heat was being generated. First heat-sinks, then fans, and then watercoolers were slipping down the technology gradient and into the mainstream. Nowadays, watercoolers are reaching home system, mainly for gamers, but also for any high-level-processing system such as may be in use by a graphic designer or videographer. With the amount of number crunching going on with those systems, a liquid-cooled system is a smart choice if you want your CPU to run at a temperature below the red zone on your hardware monitor.

At present, I run an Intel-i7 based system with 64gb of high-speed DDR3 RAM, 9tb of hard drive space, and dual nVidia video cards to drive four 1080p monitors. I also have everything ramped up and overclocked so I am getting nearly 5GHz off the CPU. I run awesome games.

My CPU was running at 96 degrees Celsius before I got this cooler to review. Instalation was quite easy once I decoded the instruction sheet. A few bits of it are hard to be clear about, so if you haven't had a fair bit of experience building systems, you would be well advised to AVOID checking out YouTube tutorials, because most of them a) don't show the actual instalation process fully, or b) show you a very detailled and accurate method of botching the job royally and burning out your processor.

Probably the biggest tick on the chart for this unit is the fact it comes fully sealed and pre-filled. There's no reservoir to keep filled, no hoses to worry about connecting water-tight, and certainly no fancy tools required. A simple screwdriver and maybe a couple of cable-ties is about all you will need. The noise factor is also a great thing to keep in mind, since this unit removes the fan from your CPU, but has two honking great fans powering the airflow over and through the radiator block. If you are lucky or smart enough to have purchased a case designed especially to have liquid-coolers mounted to it, then the next stage is a lot less hassle. If you are retro-fitting an old case, then you may need to look at ways to get your cables to the outside of the case cleanly. I would suggest you look at shoving them out through a spare expansion-card slot at the back. It may mean having to move a few cards around, but that will save you a lot of hassle, and you may be able to mount your cooler block directly to the back of the case if you are really lucky.

After fitting this and running it for a few weeks, I did another full system check of temperatures. I was really surprised at what I found. My CPU, even under full load, was now peaking at a very impressive 67 degrees, with idle temps running around the 35-39 degrees range. My system is never FULLY idle - I always have a few security apps running in the background - so that's quite an achievement in thermal shunting as far as I am concerned. The power drain on the system over all is only slightly higher. It works out to about $0.80 a month in extra power bills, so that's a great saving to my mind, taking into account that running the CPU at these low temperatures nearly doubles the life span I can expect from it running with just a fan on it. The ROI is well worth it, and if I move up to the next chip later, I can transfer the cooler as well, so it's not as though it's a 1-shot upgrade.

It comes with some great software that allows you to tweak almost every aspect of the running - fan speeds, lighting schemes, noise levels - and that alone makes this stand out from the crowd of liquid-cooler kits and units on the market. You can have it set to anything from full stealth - no lights, running at minimum speeds required to keep your CPU safe, reduced fan noise - to hard-out gamer gridlock - lights full and flashing through the colours, fans going like they are trying to make your system hover, and your CPU so chilled you could almost use it as air-con for the room - and the best bit is that you can have it automatically switching between states depending on how much strain you are putting on the system.

Looking at this as a long-term investment-protector, rather than as a geeky gimmick, it's a bargain really. The extended lifespan it will give your CPU is enough to make it pay itself off within 1 generation of chips. The style and stealth are second to none that I have seen, and that second fan on the radiator block gives you an extra cooling boost. I risked dismounting one of the fans - leaving it powered but hanging free under the radiator so it wasn't having any significant effect on the airflow over the fins - and noticed that the running temps rose a good 5 degrees, dropping back to previously recorded levels once I screwed the fan back on. Such a simple thing can have some really significant effects on the performance, which is why I think the 920 is a far better bet than the 620 model with it's single fan.

A great investment, and some serious geek kudos to boot. If I hadn't tried it, I would have assumed it was another overpriced gimmick. Having had time to really push it as much as I dare without risking my system, I can say that I will be suggesting one of these to all my gamer mates, because they spend as much on their rigs as many boi-racers do on their cars, and it's a shame to see so many of them burning out their CPU's with inferior rubbish bought online from dodgy suppliers overseas. The next logical step would be to get this unit with a slimline head that will fit between the video cards, so I can liquid-cool them too and give them a better lifespan.

Compaq Presario all-in-one PCs put everything in the monitor - there's no need for a separate PC tower - and all antennas and cables are concealed in the unit with just a single power cord for a clean, uncluttered look. The all-in-one's slim profile makes it an easy addition to any home office, family room or ... more...