« Into the West review 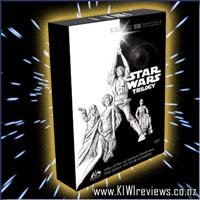 Disclosure StatementFULL DISCLOSURE: A number of units of this product have, at some time, been supplied to KIWIreviews by the company for the purposes of unbiased, independent reviews. No fee was accepted by KIWIreviews or the reviewers themselves - these are genuine, unpaid consumer reviews.
Available:
on DVD 22 September 2004

Containing 4 DVDs, this is a great value boxed set.

This is the first OFFICIAL release of the remastered and enhanced Special Edition movies on DVD... accept no substitutes!

A Million Ways to Die in the West
Rating: 1.8

Now with myself being the Star Wars fan that I am, I was rather eager to feast my eyes on this offering from George Lucas (Yes I know it's just the Special Editions on DVD), but having the Special Edition Boxed set on VHS, just doesn't give you the same clarity of picture and sound you get from DVD, plus the 4th Disc packed full with extra little documentaries it's also worth having.

All in all a big thumbs up to George Lucas and the crew at Lucas Film.

And on a little extra note: Check out the slight change at the end of Return of the Jedi.

This is it, the all-time classic trilogy remastered for better sound, re-engineered to include the special effects George Lucas always wanted, but didn't have the technology available at the time, and re-released on DVD (despite early rumours that it would never happen), and they even included an extra disk with lots of side-helpings of good-stuff.

I have always been a sci-fi buff, as far back as I can remember. And it's because of these movies that I am such a die-hard stickler for quality. Even the original movies were truely stunning for their day. Like Tron and Close Encounters of the Third Kind, this movie set new benchmark standards for excellence in terms of special effects and storyline development.

I have seen hack-job copies of the Special Edition, a mate bought them overseas and brought them back for viewing pleasure... only to realise they were camcorder-in-a-cinema jobs, mosty disappointing, but what can you expect for us$6 in a side-street bazaar. The quality difference was, naturally, hugely in favour of the official discs. But, by comparison to the official release of the original movies on DVD, the enhancements are stunningly obvious still.

My only gripe, some of the tie-fighters had faint green cubes etched around them during the first attack on the Falcon as it was escaping the Death Star. Minor slip-up there, SFX Wizards.

However, as the ONLY easily-noticeable glitch I could find throughout the entire set, this hasn't affected the score at all.

Overall, a long-anticipated addition to the collection, and ZERO disappointment really. The extra features on Disc 4 were great, adding depth and texture to an already-brilliant set of movies. With the sneak-previews of Episode 3 : Revenge of the Sith also thrown in for extra spice, I know that I will be in line for tickets when it comes to the big screen. Now I can only hope that Goerge Lucas doesn't stick to his guns, and actually WILL make episodes 7-9... or someone else will buy the rights to do so. Be a heck of a shame to miss the last third of the saga.