Into the West review 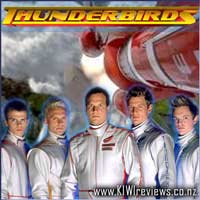 Former astronaut Jeff Tracy and his five sons live on a secluded island, from which they run International Rescue, an organization dedicated to defusing dangerous international military and security situations. The team is known as the Thunderbirds, and evil mastermind the Hood is trying to eliminate them in order to complete his nefarious schemes in peace.

I grew up watching the Thunderbirds due to my older brother watching it, but more often my dad having it on in the background, I enjoyed it as a kid but no so much when I was older, nevertheless I looked forward to the movie adaptation especially when a Star Trek favourite was director.

The acting isn't the greatest, it's still corny, which suits the show well, but there was nothing great going on, though I do like Bill Paxton. The kids do a good job but their limited acting career is obvious and doesn't really do anything good for the movie. Ben Kingsley plays a great bad guy, his character is by far the best of the lot and saves the movie from being less than entertaining. Essentially, all the Tracey family get trapped in space, save the youngest, which is by the laws of movies, his chance to prove that he is ready to be a part of the team

The special effects are done well, the ships look awesome and it was rather neat to see them brought to life, and I'd love to live on my own private little island, that would just be awesome. There's a cute little scene where you just need to be paying attention, where they have a marionette hand in place of a human hand, which I thought was a cute little homage to the original series, I like anything that pays homage to the original in a fun way.

If you liked the Thunderbirds then you might enjoy it, it's pretty much a take it or leave it movie in terms of enjoyment, I for one enjoy it.

Having watched the original marionation series, along with many of that era's similar shows (Joe 90, Captain Scarlet and the Mysterons, Stingray, etc) I was very curious to see how a live-action movie would pan out. With today's almost-real virtual modelling technology, there was a lot of scope for creative adaptation.

The casting was pretty good, although some of them just didn't 'feel right' in places, especially the younger ones. However, Ben Kingsley was a brilliant match for The Hood, bad-guy superstar with an ace up his sleeve.

The machines stay mostly true to form, the only major difference was Thunderbird 2, the packhorse of the fleet. In the original series, it was only capable of carrying one pod at a time. In the movie, there is a lot more room inside, and the cargopod carries 3 or 4 mini-pallets, each with a special vehicle. The scale matches up better now, TB2 was always supposed to be a big cargo carrier.

The storyline also stays true to the old form, with rescues of amazing heroism, imminent danger everywhere, and ever a good ol' dose of the heroes being up the creek gathering no moss in the dark as well... just to add extra spice.

However, overall I found it a bit ho-hum... I guess somewhere in the back of my mind I was waiting for some really modern twist to bring it a bit more to life. The directors even got corny enough to have one scene with a marionet hand and a human hand in it. (Hint: Going to Full Throttle, F.A.B.) But alas, even the dinky bits did nothing to add some modern flavour to a golden classic of the puppet movie era. It's still fun, and our kids will enjoy it... but you might just find it a bit flatter than we remember it.

Score: 9.3
Product reviews for listing 2781: I am Number Four
Directed by D.J. Caruso