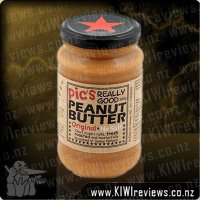 I like my Peanut butter I really do, but this salt-free version just didn't taste right to me. However using this in cooking such as a satay dish or in cookies is certainly the better option as with using it as an ingredient I didn't notice the different taste and so this was a better option for me.

On the other hand the two kids loved this just as much as the others and this time I wasn't so concerned with them consuming this jar like it was going out of fashion. I asked them if they noticed any difference in taste between the jars, to which they replied 'no, is there a difference?', ahhh if only I had tastebuds like that once more.....

So whilst I wasn't overly fond of this one i'm not going to mark it down too much as it's seemed to be just me that found it odd tasting.

I have always loved peanut butter, but with the rubbish that has been on the market for so long, it's hard to understand why a "real" peanut butter is not getting the love it deserves. Though it wasn't my top favourite of the samples, this peanut butter is one I think deserves a lot of love!

Having no added salt, I thought this one might be the best for making a Satay sauce to go with chicken, beef and vegetable mini-kebab skewers. So, after hunting for a good recipe to base my experiment on, I started making dinner. Now, in order to give a fair test, I made two sauces - one with Pic's and one with an inexpensive but common brand from the supermarket. I figured that way I could see which one gave the best taste.

Being my first time doing these, I completely forgot to soak the skewers in water for a couple of hours, so after cooking the sticks were, shall we say, somewhat less than ideal to present. A bit of sneaky skewer swapping and I was ready to serve up.

Served on a plate of basmati rice, I had two of each mini-kebab on each diner's plate - one set made with Pic's, one made with the "regular" brand. I didn't tell the diners this was a comparative test, I just tagged each skewer with a dot of food colouring - red for Pic's, blue for "regular". Then left them to it and watched.

Sure enough, everyone was able to notice a difference. Everyone commented that half the kebabs tasted "funny" compared to the others, which all agreed tasted much better. "Some of these taste sickly sweet, like you've mixed in some caramel or sweetened milk or something!" was one comment made. After everyone had finished, I asked them to tell me which coloured sticks were the "good" ones. After a moment of stunned revelation, they all thought about it and agreed the red sticks tasted far nicer than the blue sticks.

Overall, a telling victory for Pic's! Oh, and this stuff tastes amazing on toasts, too... but I think that much should be pretty obvious.

OK i have to be honest in saying that I can never taste the difference between a no salt and a salted variety of peanut butter. So it came as no surprise to me when I truly couldn't tell the difference between the original and the original no salt varieties. My kids however claimed that the original variety had a stronger peanut taste than the no salt variety. So I decided to check out the website to see if there is much salt added. So a quick google search brought up the Pic's really good peanut butter website, and according the the What's in it? page the addition of salt to the peanut butter actually brings out the flavour of the peanuts...so that is why my kids could taste the stronger flavour in the first jar. Very impressed and glad i learnt something from it too.

The jars are a decent 380g in size and packed full to the top with peanuts, there is no skimping on products here, you really are paying for a full jar of delicious peanut butter. Spreads easily, smells divine and looks absolutely peanuttily (yes i know that is not a word) good when you open the jar. At almost $8.00 a jar though sadly it would not be a regular on my shopping list, but would definitely be a treat or once a month addition though.

Like the other products, the jars and labels look fantastic and natural. According the website the jars are eco friendly glass and if you buy online they are packed in pure corrugated cardboard. So not only is the peanut butter as natural as they can get it, so is the packaging etc. This gets two thumbs up from me.

The "no salt" Original peanut butter doesn't taste as salty (funny that) as the Original peanut butter but is just as good if slightly blander. I would be just as happy with either of these peanut butters but if I was watching my salt intake would be completely happy having this and am not sure I would even miss the salt. I could only really notice the difference when tasting off a spoon at the same time otherwise the taste difference wasn't noticeable. I did my taste test off the spoon and then with my staple peanut butter and banana on toast. This is a great natural option and the taste is such that if you want to go no salt you can have this and not even notice.

Hubby tasted this and said he really liked it too. He has been having PB sandwiches every night since!

I like the quirks of this packaging in that I think there is a poem on the back of the label? If I have read the ingredients list correctly then I should be correct. I look forward to finishing my jar and very carefully peeling off the label to find out! I have tried peeling it off carefully without finishing the jar but that was unsuccessful so will have to retry. A bit of an incentive to eat it quick! As with all these peanut butters the jars are reusable or recyclable so it's all good!

Definitely a peanut butter to try and if you are after a salt and sugar free Peanut butter option then this is your jar!

I decided to stop making sweet and delicious peanut butter baking with this review and instead went savoury. I made a satay sauce, using Pic's Orginal No Salt peanut butter. Into the mixture I added honey, soy sauce, ginger and sweet chilli sauce. I mixed this up with some water and bought it to the boil. The sauce came out really thick with little peanut chunks all the way through.

The colour of the sauce was amazing. It took on a really dark caramel colour. I'm used to my satay sauces being quite pale, but this sauce really showed the quality of the product used. Even if I put this jar of goodness next to the cheaper stuff we tend to buy, you can see the difference all those extra additives make. Clearly using less peanuts cuts the cost. With this product, you are paying more per jar, but you are getting pure peanut meat in the jar. That's important to me.

The taste of the satay sauce was amazing. I could taste each individual flavour, but the peanuts definitely stood out. This was way better than store-bought satay and it was so easy to make. I couldn't believe how easy it was to throw together. I served it with some chicken nuggets, but it would have been great on a stirfry as well. Another fabulous peanut butter from Pic's.

Having tried Pic's crunchy peanut butter yesterday today it was time to try the crunchy without salt. The first thing I noticed was the aroma wasn't as strong as the salted variety but to still gave a wholesome scent that told me it was good quality and fresh. My two year old daughter once again stole my peanut butter on toast and demanded more. I have never known her to want peanut butter until Pic's arrived in our home. As with yesterday my four year old licked the jar clean but nothing will stop her from her morning ritual of jam on toast.

Today for my baking I attempted a peanut butter slice. It was a very quick simple recipe to do with my four preschool assistants. They loved it both warm and cold and continually asked for more. I admit to eating much more than I should have too. When I was doing my baking I needed more peanut butter than was in the jar so decided to use some cheap stuff I had in the pantry as well. Seeing the two jars next to each other it was easy to notice the differences:
1. The smell: the cheap brand lacked an alluring scent.
2. Pic's was a much darker colour.
3. The ingredients. Pic's contained only peanuts whereas the other one had vegetable oil, sugar and salt. I know that Pic's will be much healthier for me.
4, The country of origin. Pic's an Australian nut roasted in Nelson. The other was made with peanuts from who knows where in China.
5. The glass jar and freshness sealed lid of Pic's peanut butter tells me it is quality compared to the plastic jar and lid of the cheap one.

I am usually an unsalted peanut butter girl as are my girls so this was closer to what we are used to but so much nicer than what we normally have. I can't see myself ever buying poor quality peanut butter again. We are a Pic's household now.

Sweet and crumbly, this is a classic Russian Fudge made in Te Puke, right here in New Zealand.