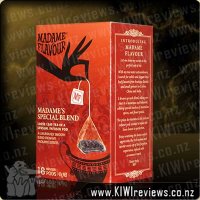 Disclosure StatementFULL DISCLOSURE: A number of units of this product have, at some time, been supplied to KIWIreviews by the company for the purposes of unbiased, independent reviews. No fee was accepted by KIWIreviews or the reviewers themselves - these are genuine, unpaid consumer reviews.
Available:
at selected Countdowns

This special blend is also familiar, shades of my English Breakfast but a little stronger, a little maltier. The leaf teas are from three of my favourite estates in Ceylon and Assam; two organic, the third, Ceciliyan Estate makes just wonderful honey-like tea.

It is my special blend. I drink it daily. Enjoy the loose leaf experience.

I tried this tea in place of my coffee, which means it was truly put to the test, the morning coffee is my ritual, but when I go away I don't like motel coffee so I will drink breakfast tea. Reading the reviews on Madame's Special Blend it sounded like an upmarket cup of breakfast tea, so the morning cup was definitely the time to try it.

The tea bags are presented in silken bags, this allows the flavour to really seep out, and also makes the presentation of the tea just a little more up market. I put the tea to the sniff test, and was rewarded with the rich scent that is similar to the smell of English breakfast. Now for the taste test, yes the tea is very similar to the flavour of English breakfast, it definitely satisfied my morning craving. The taste itself is a little more complex than standard tea, and I thoroughly enjoyed it.

I took the rest of the tea to work - teachers are discerning tea drinkers, and like me the rest of the staff were delighted by the presentation of the silky bags. They described the flavour as rich, rewarding, distinguished, and satisfying, high praise in deed from teachers in need of refreshment. They asked for the brand so they could purchase them, and when I stated the price they felt it was reasonable, and asked if we could get some for work!

Compared to the rest of the flavors in the range I guess I would call this the more normal tasting one of the lot. By that I mean this is the one that was more of a regular cup of tea taste. The tea leaves contained in it's little bag does look good, and it feels a bit more upmarket then your standard tea bag.

I liked the flavor and had no problems with it, although next time I will try it with milk and see how that goes. It is an enjoyable tea which if you aren't adventurous enough to try the other more herbal type flavors but want to try something a bit special and not the norm, then give Madame's special blend a whirl.

I have never really been a fan of the English Breakfast flavour of tea, but I thought to myself, well the other ones i've tried have all been different to what I expected so maybe this will be the same. So I brewed up a drink and having learnt from the other flavour I took this one black with a little sugar and a touch of cold water. Well it was okay tasting, but I could still get a hint of the English Breakfast flavour so it didn't really do it for me.

So while I wasn;t a fan of this one, I stil have to say in terms of value for money, and price it's not too bad, so it's managed to gain a few points there. I will have to now find someone who likes English Breakfast so that I can pass this on to someone who is mre likely to apperciate it far more than I.

I thought that I would give this a try, and this was the least appealing to me out of the remaining 5 that I had to review. My husband and I both had a cup and we both agreed that it has a very strong taste, but also a strong after taste which wasn't particularly nice. Unfortunately it wasn't a taste that either of us liked, so the chance of us having this tea again is very low.

We did put this in, just for 3 minutes, but the flavour was just to strong, the concern being that if we put it in for less time, or use it a second time (which we did eventually) was that it would then taste too weak (which, for us, it did). I do love watching the tea leaves slowly unfurl and fill up the tea bag. The tea bag itself is a great design, and I LOVE the design on the box. But, I would not buy this again.

English Breakfast is hubby's favourite brew so I thought I would get his opinion on Madame's Special Blend as he is a seasoned tea drinker. He is also the best tea maker so I got him to make me a cup just in case my own tea making had affected the taste! Unlike some of the other Madame Flavour Teas none of the tea in this blend is organic and it is blended from three estates with black leaf tea. Unlike the other Madame Flavour Tea's this packaging's instructions does not recommend reusing the infuser pods. I did however and still got a decent cup out of my second bag. I would use one pod for a cup of tea for two.

Hubby liked the pods, "these are a bit flash". He thought that this was better than the average cup of tea but not spectacular given the cost. I really liked this tea however and enjoyed drinking it. I enjoyed it more than normal tea (and much more than the Earl Grey). It is more expensive than our usual English Breakfast or tea brand so I am not sure I would purchase this but it is a nice full bodied flavour that is definitely enhanced with my usual milk and one sugar. This makes for a very enjoyable cuppa!

Anyone familiar with regular English Breakfast tea is going to find this immediately comfortable to drink. Unfortunately, I found the flavour no different than the regular teas which lowered its appeal a fair bit.

I like my teas weaker than most, which means that I can get 4 and sometimes 5 cups out of a single pod, depending on the tea variety. Because of that, this box of 18 pods is of cups-made value equal to around 90 regular bags for me, which makes it great value for money, and to be quite blunt about it, that is really the only reason I plan to keep buying it.

It is a lovely tea, and all of the whanau who tried it agree it is a tasty drop, even if they do prefer theirs steeped a lot longer than I do, but there just wasn't anything really amazing about it other than the clever pods that really let the flavour out so much more effectively, allowing you to get more than one cup per pod.

I'm used to the style of an English Breakfast tea. Its what my mother would usually drink. So when I had a cup of this, with milk it tasted like home. That said, it didn't wow me with it's flavours like the other teas. It just tasted like tea ought to and that's all. I shared a pot of this tea with friends. They all enjoyed the tea hot with milk. But as with me, they raved about the other teas they were trying and had little to say about this "everyday" tea flavour.

I decided to see what it's versatility was like. I made a custard from scratch with egg yolks, cream, milk and castor sugar. I flavoured the mixture by boiling a tea bag in with the cream and milk before the yolks and sugar were combined. I then set the mixture with gelatin for the evening. The flavour of this dessert was subtle in its tea qualities. But it tasted very much like a creme brulee without the toffee on top. My husband was impressed, as was I.

I managed to make quite a few cups of tea as well as the dessert out of the same tea bags. This product range is great for the fact that you really do get multiple uses out of the same bag. That makes it economical. The bags look great. You have that loose leaf look, with a very elegant looking tea bag. The string is nice and long too. Even though this was probably my least favourite tea in the range, it was still a good tea. It was just a bit too ordinary after all the amazing teas I have tried in the range.

Featuring sweet caramel undertones, this latte is sure to satisfy right down to the last sip.

Each box contains 10 individual serving sachets. Perfect for popping a couple in the glovebox for those emergency caffeine boosts on long drives.