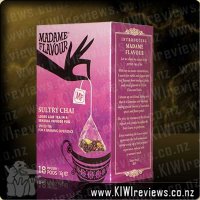 Disclosure StatementFULL DISCLOSURE: A number of units of this product have, at some time, been supplied to KIWIreviews by the company for the purposes of unbiased, independent reviews. No fee was accepted by KIWIreviews or the reviewers themselves - these are genuine, unpaid consumer reviews.
Available:
in selected Countdown stores

Wow I have never been a tea drinker that was until I found this Sultry Chai tea of course and now I can't get enough of it! I have been drinking a cup of this each night since my first taste as I love the taste. From the moment I first opened the box I was in love with the strong aroma that began leaking out of the packet. The combination of the different spices and leaves creates a very inviting aroma.

Well that combination also creates the most warming drink. Making this on a cold night with hot milk and honey makes your whole body warm up. Not only that but the drink is so relaxing I find if I have had a stressful day as soon as I sit down and start sipping on my cup of Chai tea my body instantly starts relaxing. That is why it has become my nightly unwinding cup of tea once the kids are in bed and the days jobs are done.

I have tried a few of the different Madam Flavour Teas and this is by far my favourite. I do prefer it without the honey as I find with the cinnamon it is sweet enough without it, but the honey does add a different element which again is really warming. I received a box of this as a prize in the KIWIreviews birthday month and as soon as it run out I had to go out and buy another box as I couldn't imagine not having this at the end of the day.

I have to admit sultry chai is my favorite flavour in the Madame Flavour range. First off it comes in a great looking box, which is much more then what can be said for standard tea out there. As it is a loose leaf type tea where you can actually see all the individual pieces inside the little pod and the smell given off once the packet is open really is pleasant.

As per any manly man I didn't read the instructions and ripped right into it, making a brew and then drinking it straight, after further inspection I see the directions call for milk and honey to taste, while this adds to the experience I think I preferred it with just hot water.

It has a nice taste on the tongue, with no bad after taste, and is a nice calming relaxing drink, something I would have at the end of the long day. For my first real experience with a chai tea, this has been a good one. Something I would recommend to my tea drinking friends.

Whilst I am a bit of a tea drinker I have never really been fond of the more grandiose types of tea, especially the infused type as they have never really had a taste that I liked. But then this came along and changed my mind about infused tea.

I had never had chai tea before, but I was eager to give it a try as the destription made it sound so delicious. So I decided to follow the directions on the pack and I warmed uo some milk and added in some honey and left it to simmer for a minute or two, then I added one pouch of chai tea and left that for about 5-6 minutes. I then removed the pouch and let it drain and put it aside, then I poured the resulting mixture into a cup and sat down for a try. This was a wonderful brew, it had a delightfully gentle spicy taste, and it had a gentle smell a bit like mixed herbs.

I few days later I decided to try the reusablity of the pouch and this time I mixed up enough for two cups, and whilst it still tasted devine, it was apparent that I would get no more from the pouch, but that wasn't too bad considering that a standard teabag is useable only once, but I also feel that the price was okay as you get 18 pods and up to 3 serves per pod so that gives you up to 54 serves per box, which comes out to a total of 0.12c per cup, now you try paying 0.12c for a good cup of tea like this in a fancy cafe....

The first thing that caught my eye, and had me wanting to try it first, was the gorgeous colours on the packaging. It's simple, lovely and easy on the eyes. The box is nice and easy to open, but the bag inside required scissors (which I had to hunt down). We decided to try it as was suggested on the box. Leave the tea bag in the water for 2-4 minutes then add a little bit of honey and milk. This was ok, but nothing great and didn't really have the Chai taste that I was expecting. So it wasn't really a win for us, but we did decide to give it another try.

For our second cup of this tea we decided to halve the water, still add milk, add a teaspoon of sugar instead, and due to getting distracted by the elections on TV, if spent 30 minutes in the water.

However, this made it taste a LOT better, and made this way again, I would happily drink it.

In regards to price, I doubt I would spend $6.50 on tea, but, if it was on special then I think I would buy it.

Normally I like a nice weak tea, so this was one I was not too keen to try, mainly because I have seen Chai being made and it is a bit too much for old arthritic hands to deal with. One of my mokopuna dropped in to check on her old koro, and offered to make it for me to test. I have to admit I was surprised.

Though I prefer my tea to be quite weak, this was very strong, thick and far too milky to normally ever appeal to me and yet it was wonderful! Full of flavour, it wasnt so much like drinking a tea as a tea and spice flavoured hot milk. This was quite acceptable to me, which surprised me a lot.

I dont think this is one that will be a regular in my house, mainly because of the fancy preparation a 'good chai' is suppose to go through, according to my tamahine. But I suppose since it would probably be a drink I bring out for visitors more than to drink myself, there is a good chance one of them could make it instead. A very pleasant drop, really, but one I think I will save for Christmas when the whanau come to visit.

As with all the Madame Flavour Teas these 18 pods of Sultry Chai are packaged in a lovely little cardboard box that has an individual story on the side about how Madame Flavour created this tea. As much of her tea as is possible is organic and this is 84% organic. The foil packet keeps these lovely little biodegradable infuser pods fresh but is very tricky to open without scissors. There is a little M sticker that you can use to reseal the foil bag. As soon as the bag is opened the most divine Chai smell wafts out and starts to whet your taste buds. The smell is incredibly warming as is the drink. Its a very comforting winter drink that you just want to curl up on a couch with...

The infusion instructions recommend making this Sultry Chai with honey, but I didn't have any, so I infused in boiling water then added raw sugar and milk. I left the tea bag in for about 6 minutes and the tea was just divine. I was able to reuse the pod and did this by boiling up some milk with the pod in it then adding sugar.

I really liked this and although not as rich as what I would have in India I think this is probably one of the best "instant" teas I have found on the market. I love having Chai tea and will definitely be purchasing this in the future.

When I think of a Chai Tea, I imagine a tea spiced with cinnamon. That's about all I had in my head when I received this box. But Madame Flavour's interpretation of Chai is so much more.

I did a quick google to see how a chai tea should be served, because the description on the box suggested hot milk and honey. Into a saucepan I put a cup of milk and a cup of water. I brought it to the boil and then added two teabags. I left the bags in for 5 minutes and then added 1/4 cup of honey. The aroma in my kitchen was amazing. So spicy!

I served these to friends who came for a tea party on the weekend. They enjoyed these hot milky drinks. One comment was that it tasted like he was drinking a Christmas fruit cake. This was definitely the second favourite tea of the day for my guests.

I re-used the teabags twice more, and towards the end, the flavour was no where near as spicy. So I would recommend only re-using these ones once more after the first go. It is like a beautiful dessert tea. I really liked this one and will definitely be buying more once I run out.