« Captain Underpants and the Terrifying Return of Tippy Tinkletrousers review 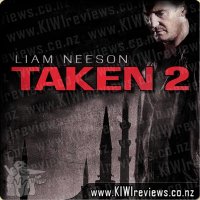 Disclosure StatementFULL DISCLOSURE: A number of units of this product have, at some time, been supplied to KIWIreviews by the company for the purposes of unbiased, independent reviews. No fee was accepted by KIWIreviews or the reviewers themselves - these are genuine, unpaid consumer reviews.
Available:
in cinemas from Oct 11th 2012

In Istanbul, retired CIA operative Bryan Mills and his wife are taken hostage by the father of a kidnapper Mills killed while rescuing his daughter. Having seen the original film, I didn't really know how they could possibly come up with a proper plot to the film without repeating so much from the original. But I suppose the beauty of this film is in the simplicity. One side wants vengeance, while the other wants nothing more than his family to be safe. The simplicity makes it an easy film to watch, though occasionally does come off a bit silly (While mainstream media has me under the impression that places in the Middle East are full of explosions, it seems odd that nobody would notice someone throwing grenades around).

But it wasn't extravagant, it didn't pull any punches, and there were no hidden motives. No master plan. Just a man that wants vengeance for the death of his sun.

The action was very much enjoyable, and kept the film fast paced. The low-key technology way of solving problems is fun, and reminds me a lot of the ingenuity that New Zealanders are typically famous for, so it gave me something to empathise with.

Liam Neeson does a great job as his character, as he did in the original film, and his female costars are definitely pleasing to the eye. It was good to see his daughter playing a larger role in the second film. I am certainly looking forward to the next addition to the franchise.

Having been utterly enthralled by the first movie, and knowing that sequels rarely live up to the same standard, I was expecting something full of action - it had Liam Neeson reprising his role after all - but somehow lacking. There are times I love being wrong. Sure, it was predictable in places, there's only so many ways a hostage drama can unfold, but what got me was the gritty reality of it. Nothing too over-the-top or James-Bond-to-the-Rescue... just a man with a particular set of skills, protecting himself, his wife and daughter in the face of a revenge vendetta, payback for the deaths of the thugs from the first movie.

The biggest highlight - the action and chase scenes for sure. The lowlight - the cheesy ending. But just ahead of the cheese came the opener for a possible third movie. When the hero faces off against the bad-boss, there's a discussion that sets the choice; end it now, or watch for the next in the series. I find myself wondering if this is going to be like the "Fast and Furious" franchise where #1 is great, #2 is so-so, but #3 comes back and reinvigorates the story, or if it's going to be more akin to the many other series franchises where #1 is good, #2 is so-so, #3 is trash... and they either give up there or continue to dig deeper hoping to strike gold before they collapse under the pressure. I am sincerely hoping it's the former case, because this franchise does have potential for another good story before it runs dry, and a third movie has apparently already been put in the works.

Overall, though it wasn't up to 100% of the original, it was a good movie to watch if you like action, crazy driving, lots of hand-to-hand combat and survival tactics. Little things like hiding a spare cellphone on you if you are in a foreign country, how to tell how far away you are from someone you're on the phone with, using only a hand-grenade (yes, really! Think lightning storms.) and how to keep your head and figure out where you were taken, in case you need to lead your rescuers to you, or return there later yourself. With less graphic violence than the first movie, this is a little tamer, which takes something away from the grittiness of it for me, but still, I found it pleasant viewing.

Score: 8.5
Product reviews for listing 5220: Harry Potter: 5: The Order of the Phoenix -  Directed by David Yates

Harry returns for his fifth year of study at Hogwarts and discovers that much of the wizarding community has been denied the truth about his recent encounter with the evil Lord Voldemort. Fearing that Hogwarts' venerable Headmaster, Albus Dumbledore, is lying about Voldemort's return in order to undermine his power and take his job, the Minister for Magic, Cornelius Fudge, appoints a new Defense ... more...