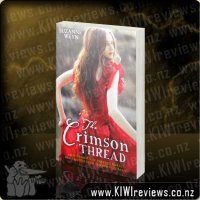 Disclosure StatementFULL DISCLOSURE: A number of units of this product have, at some time, been supplied to KIWIreviews by the company for the purposes of unbiased, independent reviews. No fee was accepted by KIWIreviews or the reviewers themselves - these are genuine, unpaid consumer reviews.
Available:
October 2012

It is 1880. Bertie has recently emigrated to New York from Ireland. Struggling to make ends meet and care for her younger siblings, Bertie finds work as a seamstress for textile tycoon, J.P. Wellington.

When the Wellington family fortune is threatened, Bertie's father boasts that she can save the business. She can "practically spin straw into gold". Amazingly, overnight Bertie creates exquisite evening gowns - but only with the help of a mysterious man who uses an old spinning wheel. With dazzling crimson thread, he makes the dresses look like they are laced with real gold.

Bertie would do anything to pay this man back for his help. When he asks for her firstborn child, Bertie agrees, never dreaming that he is serious ...

The Boy in the Striped Pyjamas
Rating: 9.5

The Topp Twins Treasury Of Sing-Along Stories including CD
Rating: 10.0

In this non magical retelling of the classic Rumpelstiltskin, author Suzanne Weyn has instead given the reader a story set around an immigrant Irish family, freshly arrived to the slums of 1880 New York. While a clever idea, it is sadly mediocre in its execution. The characters are all rather shallow and underdeveloped, making it difficult to follow the story that is mostly a narrative telling, rather than a descriptive showing.

The men in the family are all selfish and self serving, and basically abandon Bridget to work and support the two smaller Oâ ™Malley children. Bridget or Bertie as she is come to be known is extremely naive in her behavior, making her an unbelievable and unlikeable character. Ray Stalls, though supposedly a critical character to the story, only makes brief appearances and is for the most part forgotten, again distorting the original role of the character until he is a mere shadow of his dastardly namesake.

Full of historical inaccuracies, (the statue of liberty that was still in France until 1885, and the inaccurate and exorbitant price charged for yarn - just to name a few) the story is very slow to start, made all the more frustrating by the juvenile phrasing, dragging the reader along, until its abrupt and unfulfilling end.

From start to finish, The Crimson Thread is a rather flat, under whelming read that I wouldnâ ™t recommend for anyone over the age of 13.

The Crimson Thread is two things. Firstly it is a modern(ish) re-telling of a famous fairytale. Secondly, it is a tale of an Irish family and their struggles upon coming to America to seek their fortune. Bridget and her family arrive in New York with all their worldly possessions. In order to get good work, they must change their names and start all over again.

This book is well written. It hooked me from the first few pages and I couldn't put it down. I enjoyed all the characters, though there were a lot of them. I found it a bit hard to keep a count of the O'Malley family. Then when they started changing their names as well, that added to the confusion. There are a lot of players within the story too.

I enjoyed the history aspect of the book. I didn't know too much about New York during that time. I did know that the Irish had it hard when they came to America and this book explores that lightly. Sometimes I felt like the historical aspects were being highlighted too much. Like the author had struggled to think of a subtle way to say it, but it might have been because it's written for younger readers.

I also felt that the fairytale aspect was nicely in the story, until the end. I could see it clear enough, but subtle. Then towards the end, it was as if the author was banging on a pot with a wooden spoon "this is the fairytale I based the book on, see!". I just felt it was a good enough story without almost lampooning it. Still, this is for younger readers and they might not even know the story.

This is a new edition of the famous Dahl story of Charlie Bucket and his Golden Ticket, and Willy Wonka and his amazing chocolate factory. It features a great new Quentin Blake cover as well as a whole new exciting end section about Roald Dahl and his world.