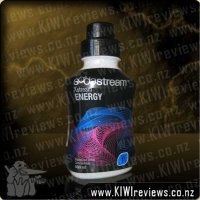 Disclosure StatementFULL DISCLOSURE: A number of units of this product have, at some time, been supplied to KIWIreviews by the company for the purposes of unbiased, independent reviews. No fee was accepted by KIWIreviews or the reviewers themselves - these are genuine, unpaid consumer reviews.
Available:
at selected quality retailers and online sales sites

Making carbonated water and soft drinks is so simple. Turn tap water into sparkling water in 3 seconds! Enjoy the convenience of home soda and protect the environment. No heavy bottles to carry, store at home or throw away. Fizz to your taste with our delicious syrups. Add the flavour of your choice and make your favourite drink. Simple to clean and reuse. With the latest designs it will also look great in your kitchen. So... do you still do bubbles?

SodaStream Xstream Energy gives you a way to customise your energy boost! Containing vital minerals, vitamins and caffeine, this gives you the get up and go, just the way you like it.

I have to admit I am a huge caffeine addict whether it be hot coffee or a cold energy drink I just have to have it to get through my day. Of course energy drinks are pretty expensive so this is a very cost effective way to enjoy an energy drink every day. One bottle of syrup would give you enough energy drink to last a few weeks easily. Especially as I am the only one in the household that likes to drink Energy Drinks.

I was a bit apprehensive on first taste as I generally only drink V finding the likes of Monster Energy and Redbull to be just too sweet and medicinal tasting. But this does have a very pleasant taste, it is quite similar to V although I found it to have a sort of bitter aftertaste and a lot less sherbetty. I liked it a lot and could easily drink it every day. The only thing I would say is don't drink it until it is adequately chilled as straight from the tap it tastes absolutely gross.

Well energy drinks don't give me an energy kick anymore as I have been drinking them for so long and also drink a lot of coffee. So can't tell you whether the drink is effective in terms of energy boosting but I can tell you it sure gives me my caffeine fix and prevents me from getting the killer headaches I get when I haven't had enough caffeine! My daughter who is 11 had a small sip and felt that it made her get dizzy so that may mean that the caffeine was giving her an extreme dose of energy!

I am not a fan of energy drinks at all....but I am a HUGE fan of Sodastream!! I was however apprehensive but at the same time curious when I saw a bottle of Xstream Energy on the shelf at the shop. It was on special so I thought what do I have to lose I will give it a try and WOW....yummo!!

When I first made it I didn't use the full amount of flavour (as I do with all flavours) because I find them to be too sweet and syrupy, and I got the amount just right...enough flavour to taste the carbonated water. At the time of trying this flavour I was training for the Cancer Society's Relay for Life and I mixed up a bottle to take with me while out walking, and it gave me that extra energy boost needed to keep going a little more.

I have tried a few different energy drinks and I haven't enjoyed the taste at all so haven't brought them again but I have purchased another bottle of Soda Streams Xstream Energy as I used the first bottle up in no time....the flavour is very palatable and enjoyable to drink.

Being able to make up 1 litre of drink at a time also offers a good amount while I am working out or walking, and being able to make up 12 litres (usually more in my case, since I don't use the full recommended amount of syrup) works out to be way cheaper than buying other ready mixed energy drinks as well which is always appealing to save money.

Maybe this flavour isn't for everyone but for me it is perfect, and because I can make it the way I like, make the flavour stronger or weaker, add different flavours in with the syrup it is a win win situation all round....give it a go and make up your own mind...I recommend it highly.

Tasting very close to a very popular energy drink on the market, this is a syrup you will either love or hate.

Keeping in mind this is an energy drink, with artificial components - some of which have names that won't mean anything to the huge majority of people, I had to ask the SodaStream rep about the artificial sweeteners, one of which - Acesulfame Potassium - sounded a lot like the dreaded Aspartame. This is NOT the same thing! In fact, this is a non-nutritive sweetener that passes right through your system virtually untouched. The other artificial sweetener in this drink is Sodium Cyclamate - also known as Sucaryl - both are actually very widely used, and approved by the US FDA (Food and Drug Administration) as GRAS (Generally Recognised As Safe) at current usage levels.

Containing such dietary gems as Vitamins C, B2, B3, B6, B8, B9, B12 and Caffeine, this is a drink that carries a bit of a kick alright... and if you can handle the taste, making up 12 litres of drink, this works out at around 75c per litre, or 1/12th of the price of the product it tastes so much like. The other big advantage is, of course, you can play a bit of mix'n'match with Sodastream syrups. I found this was a little more to my tastes when mixed with something fruity, but it would probably go well with something berry too.

Overall, this flavour was not really to my tastes, but knowing how close a flavour it is to a very popular energy drink, I know this will appeal to a very wide audience.

Sure to impress even the most discerning chocolate connoisseur. It's time to be selfish - this magnificent drinking chocolate is not an easy one to share.