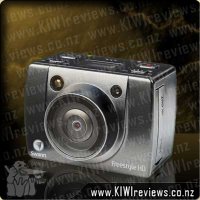 The Swann Freestyle HD Action Video Camera is the ideal accessory if you're a weekend warrior that likes to play like the pros. Capture the time you catch the perfect wave, land an awesome jump, play a stellar riff or your kids first strokes in the pool - all in High Definition 1080p video or as 8MP still images. The best part? You can share every one of these moments with your friends and family by uploading the footage to a computer via USB or straight on a TV using the HDMI connection.

Getting the Swann Freestyle HD wet is no problem either. Simply slip the camera body into its waterproof housing and it's protected in up to 65ft/20m of water. Included in the pack is a range of mounts including a helmet mount and 2 different sized universal mounting brackets perfect for flat surfaces such as skateboards, bikes, snowboards and more. Even better you can instantly line up your shot or view your recorded footage on the included 1.5" LCD screen viewer. The viewer sets the Swann Freestyle HD apart from many of the other cameras around, giving you instant playback when you want it.

With so many failed attempts to get "driver's eye view" footage of the remote control cars we sometimes get to test, I was despairing of ever capturing some good raw material for some YouTube clips... I have managed to destroy 2 point'n'shoot digital cameras, and almost destroy two more, in my attempts to get action shots mere centimetres above the roadway... then I was presented with this beauty... and that changed things quite a bit.

One of the best features, as far as I was concerned, was that was ready as-is to survive light sprinkles during outdoor shooting. I had time to drive the cars back to me and cover them without the camera fritzing out the way one not-so-cheap digital camera did during an early attempt a few years back. Also, it proved amazingly sturdy, when it accidentally got slammed into a low-slung gate when I lost steering control on one car... unlike the digicam I had tried to use that morning which didn't survive a very similar impact at any way "intact".

But, the biggest highlight of course is the full HD resolution, giving a lot more pixels to work with, and allowing a vastly superior result from advanced image stabilisation algorithms in the video editing software. The flipside of that coin is, of course, it takes longer to process and edit said footage - something I have had to relegate to the back-burner to devote the time to other more pressing priorities.

This unit also comes with a waterproof case, that will allow you to take the camera down to a depth of around 20m which is ample for the casual user, be they swimming, diving or doing in-water boat hull inspections (one suggestion that leapt to the mind of a friend when I told him about this unit.) The battery life also ensure that in theory, it will remain running longer than you will.

The box also contains a number of assorted mounting plates and brackets, interchangeable poser-arm sections, and spare adhesive pads. One of the best bits is that the plates are designed to be adhered on, but also have slots for allowing them to be strapped into place - great for those who want to be able to relocate the camera without having to fork out megabucks on replacement adhesive pads.

A very nifty addition to this kit is the clip-on screen and control panel, allowing you to play back your recordings wherever you are. Not really advisable for prolonged use - due to the added battery drain caused by driving a visual display - but even so it's an almost indispensable extra. I only wish they had designed the underwater case to allow the back panel to be attached, and used... but alas, the camera must remain screenless to remain watertight.

The only real gripe I had with this kit was that it didn't come with even a small starter memory-card - with the price of a 1gb microSD card around the $5 mark if bought in bulk, throwing one of those into the box should have been a bit of a no-brainer... still, if there was any one item to be left out, I suppose that was the least functionality-reducing item. The camera wouldn't work as well without a battery, screen or charger cable.

Now, getting the footage off the camera... though it comes with software on a mini-CD, if you run a modern operating system, you should just be able to plug it in and turn it on, for the system to recognise it, install drivers, and allow you direct access to the device. Be aware that some system will register *2* new devices, one being the camera and the other being a removable-media drive with a card installed. Don't panic if you can't find your footage first time around, just go look in the OTHER new device.

Overall, though this is still quite blocky and brick-like to use, and will often get confused as "...the newest GoPro..." you'll find it will serve you pretty well. I found it very handy at the Armageddon Expo the other day. By mounting it on a monopod, and strapping the remote control (yes, as with all good "Boys' Toys" it comes with a remote) I was able to lift it up well above head-height and start recording to get crowd shots, or footage shot over the heads of those between me and the celebs. All it needs now is the ability to make a mobile WiFi hotspot so you can get live-streamed footage on your phone, and you have the perfect portable video device.

The Swann Freestyle HD Action Video Camera is the ideal accessory if you're a weekend warrior that likes to play like the pros. Capture the time you catch the perfect wave, land an awesome jump, play a stellar riff or your kids first strokes in the pool - all in High Definition 1080p video or as 8MP still images. The best part? You can share every one of these moments with your friends and family by uploading the footage to a computer via ... more...