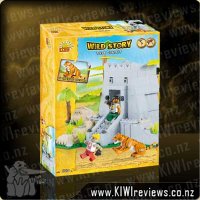 Watch out! This tiger will give you a close-up you'll never forget!

Features:
•  220 pieces
•  1 animal figurine
•  2 people figurines
•  Recommended for ages 6 and up
•  Fully compatible with most other construction block kits

I have long ago outgrown such toys as these, but as usual, within minutes of the courier leaving the mokopuna are knocking on the door just wanting to visit their old Koro for no other reason than they thought I might want company. This time around, it was very easy to see them looking around the room trying to see where I had put the parcel the kind courier lady had just dropped off. Cynical? Me? Oh yes, very. But at least this time it was a great opportunity for me to help out the crew at KIWIreviews in their hour of need, and entertain the young ones, without having to do more than watch and take notes.

Unpacking this was very easy for even the youngest kids, as the bags were tough and durable but tore open easily when pressure was applied at the seams. Very much like a bag of crisps but without the same mess when the bag tore a little too easily in one case. No worries about this lot getting ground into the carpet and staining.

Assembly was quite simple structurally. These blocks are the same in almost all regards to the rest of the major construction block brands out there, a fact that means they are also entirely compatible with those same major brands. This means that if you have some of the other ones around, you can mix these in and will never know the difference. After buying some cheap versions off one of those trading sites, I threw it out and considered myself lucky it was on sale. This brand, I would trust and treat just as highly as the most respected brands because of how well manufactured it is, and clearly from the highest grade materials.

The instructions gave some of the youngest ones a bit of trouble, just in the way the diagrams sometimes don't show you all the block locations because they are obstructed by pieces placed in earlier steps, but they managed to work it out. I was secretly pleased by this, as it means that the kids are getting some real brain action going on rather than just following the directions like little machines. The finished model was both pleasing to build and play with for the girls - who spent most of the time with the figurines filming nature documentaries, and for the lads - who spent most of their time with the tiger hunting the little female figure while the cameraman gave evil laughs from up on top filming the whole episode. Typical.

Though I doubt I would spend $55 on a toy, I would quite happily spend that amount on something like this as it doesn't stay as one thing. It's form and function is limited only by the imaginations of those playing with it. If my arthritis hadn't been acting up a lot lately I have no doubt I would have been down there playing with it myself before long, but this old warrior has wounds enough to deal with, without adding tiger bites to the list.

A great building set well worth the price, especially as a kit with a similar number of pieces and figurines is at least 30% dearer in the stores if you look at the major brands.

This lovely little doll is so cute! She has a rattle necklace, clinky rings and interesting textures and sounds.