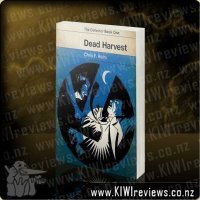 Sam Thornton collects souls. The souls of the damned, to be precise.

Once collected himself, he's now doomed to ferry the souls to Hell for all eternity, in service of a debt he can never repay. But when he's dispatched to collect the soul of a girl he believes is innocent, Sam does something no Collector has ever done before... he refuses.

Underland Chronicles 2 - Gregor and the Prophecy of Bane
Rating: 9.4

With a number of TV series and books along the same line - including the "Madison Avery" series by Kim Harrison and the somewhat humourous TV series "Dead Like Me", I was wondering whether this story was going to differentiate itself from its peers... and it did. A lot more gritty and 'real', it adds a different twist to the reaping, no scyths here buddy, it's all done by hand in a manner that reminds me of that Kali-worship scene in Indiana Jones and the Temple of Doom.

With a strong 'the ends justifies the means' message, this story isn't one I would suggest for younger, impressionable readers. Even with the moral judgement Mr Spock made in Star Trek - "The needs of the many outweigh the needs of the few", I still thought the idea of killing a few innocents in order to save the world was played on a little too much for my liking. Despite the female protagonist - Kate - making the point that just because he has done things a certain way for decades, doesn't mean there isn't a better, less violent way, the main character - Sam the Collector - stills seem bent on doing everything as brutal and violent as possible. From trying to kick in a door that can be unlocked by using the key Kate just found, to dealing with 'people obstructions' it always seems Sam chooses the most aggressive option available. Sorry, but that was one aspect of this book I REALLY didn't like.

Despite that regular reminder of the darker side of even the best people, I found the story quite intriguing, if more than a little predictable. I could clearly see elements of the movie adaptation of "Constantine", the aforementioned TV series, as well as "Supernatural", the book series by Kim Harrison, and even a dose of good old Private Eye movies from the 70s and early 80s... but the seamless way in which all these elements were woven together into a very coherent new universe was at the very least, quite impressive.

Overall... yes, I had some issues with this story... but did I enjoy it? Surprisingly enough, yes I did. Despite the rough and overly aggressive tone, there was a solid undertone of a lost soul, taken by trickery and damned to serve the needs of Hell for all eternity, yet still hoping to be redeemed for his mistake. Entrapment at its very worst - the very hallmark of Hell's dodgy method of dealings. There was one message tucked away in here that I really did love - doing the right things for the wrong reasons is just as bad as doing the wrong things. As Dumas says to Sam at the moment he becomes damned, "...intent is everything." For those who like their fantasy gritty and dark, this is probably going to be worth checking out. As the first in the series, it shows a lot of potential, and the excerpt at the back of the book from the next story gives hope and promise to this fledgeling universe. I for one will be keeping an eye out for it, and hoping it lives up to it's promise.

A hard-driving businessman sees love with new eyes when a sweet young widow and her son change his life -- and his heart -- forever. Wealthy corporate genius Jason Wilding reluctantly takes a break from his high-powered world to visit his home town of Abernathy, Kentucky.

As a favor to his physician brother David, he finds himself spending one week as a live-in baby-sitter in the ramshackle home of Amy Thompkins, who has captured ... more...