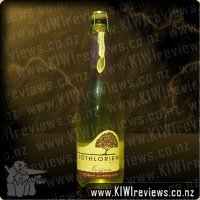 Our award-winning sparkling feijoa wine comes in three different styles. Each one has that distinct unmissable feijoa bouquet evoking late summer memories of sitting under a feijoa tree enjoying this fabulous fruit.

Medium - A sweeter finish that gives a lingering roundness on the palate. The Medium is our most popular wine.

Attending the Green Living Expo in Auckland last weekend, I came across an exhibit by Lothlorien, offering free tastings of their Feijoa alcohols. Being an expo for renewables, organics, and general minimization of wastes, I was impressed to find that this was the only exhibit that was using glasses as opposed to single-use disposable plastic cups. Upon chatting with them, I learnt that they are often attending markets and expo's, so they made the decision to reduce their carbon footprint by using reusable shot glasses for their samples.

That alone made me want to support this local New Zealand business, so I gave all of their wines a try, and even tried their liqueur. But it was this Sparkling Medium wine that blew me away. It comes bubbly like a champagne, and the retains its fizz even an hour after opening the bottle. The flavour itself is strong and has very little actual traditional "wine" taste to it. A remarkably fruity endeavour, I enjoyed it immensely, and was impressed with the apple/feijoa combination that they had chosen to use. Enough apple to form a base for the wine, but not so much as to overpower the flavour of the feijoa. The sweetness comes with the expected lower alcohol content, but that held no significance for me.

I immediately bought a bottle of it after the tastings and was pleased to find that it wasn't too expensive, considering the fact that it is organic, and has such a delicious flavour. I certainly wouldn't have questioned paying more for it. My only issue is that it doesn't last. the bottle was finished by the end of the night, and I still wanted more.

Ok so the word feijoa took my fancy I love feijoas and enjoy a wine or two so though the two of them should make me dance around the room. I had to get my hubby to open it cause lets me honest I'm useless with opening wine. Upon it being opened it smelt good just like feijoas I could sit there just smelling the wine.

Pouring it into a glass you can tell its sparking its still got that lovely smell to it with a few bubbles. Taking a taste and I would say its more of a sweet wine not just medium, the first glass went down pretty fast normally I sit on my wine and take it real slow, you can taste the feijoa though it. My next glass I tested with food cause when I drink wine normally its fine until I eat and then I can't seem to down the wine as it gives a different taste.

Upon eating, I tested the wine again and yup it gave me that different taste that I don't like after food, so this wine for me is a no meal drink but its great with crackers and cheese etc just not a full blown meal. Its def a wine I would give another go with as I did enjoy it without the meal. Sadly the price doesnt fit my budget so it might have to be a wait till on special wine

I have to say that after reading the rave reviews on KIWIreviews, I had to rush out and try a Lothlorien product. They all sounded pretty good. So I checked on their website and drove to an unfamiliar supermarket to see if they had a bottle of this medium wine variety. Thankfully, they did indeed have a bottle. It was the only thing they stocked in that store, but I hope to seek out other varieties in the near future. The bottle of medium cost me $13.99 which was in line with the pricing on the Lothlorien website minus postage so I was pretty happy with that.

The first thing you notice about this wine is the beautiful way it is presented. The bottle is a clear glass with a die cut label showing a beautiful tree motif. There's a golden leaf on the neck, confirming that the product is organic. The bottle itself is sealed with a real cork and minimal wrappings, giving it a very crisp and clean look. There was also that satisfying POP when the bottle opened which is always exciting.

So we had a glass of this each. The first thing I noticed was an almost floral smell from the wine. I reminded me of apple and feijoa tree blossoms and summer and all those good things. As I took my first sip, a taste of feijoas hit the back of my throat before any of the wine got that far. The essence of feijoa is right there. Then the taste of the wine itself is sweet but there's also end notes that are quite sour. Lemony at first, but then you start to recognise the flavour as the sour of the feijoa skin. To me it tasted like biting into a feijoa, skin and all. I wanted to try baking with it, but before I knew it the bottle was empty. It lasted two glasses each. As far as feijoa wines go, this one was very nice. Hopefully more will find its way into my basket next time I go to that supermarket.

Of the three types of Lothlorien, this was one I was expecting to rate well, but not be my favourite. I was wrong, this was, for me - and my wife, who is a very selective wine drinker - the favourite of the lot. I would class it more of a medium-sweet than a straight medium, mainly because the natural sweetness of the fruit shines through the very subtle sharpness of the alcohol, leaving a well-rounded flavour and a rich aftertaste that lingers with a sweet feijoa wash. A solid fruity bouquet pleases the nose as much as the wine pleases the tastebuds, making this an all-round winner in my books.

I used this in a #FoodLab cheesecake - "Tropical Marshmallow" - along with some orange and lemon-lime Sodastream flavours. It helped give the cheesecake a more balanced fruit flavour, managing to shine through without drowning out the rest of the fruity flavours. Possibly one of the best cheesecakes I have made yet, this is a recipe I plan to keep on hand towards the potential future cookbook - Tucker's Tucker : Experiments from the KIWIreviews #FoodLab."

Overall, a most excellent drop, well worth exploring for those who enjoy something a little more sweet and fruity. This went well with a BBQ dinner, but I think it would also hold itself well with a fried or seared fish dish. Poached fish may or may not work, depending on the fish as this has a definite flavour and may drown out more delicate fish. Try it with salmon or a nice fresh trout and you should be fine.

The zing of ginger blended with crisp East Coast apples makes this the perfect choice for refreshing on those hot stuffy days or warming you up on a cool balmy evening. Best enjoyed chilled over ice.