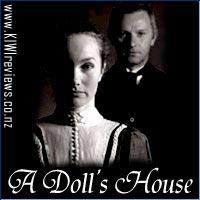 Disclosure StatementFULL DISCLOSURE: A number of units of this product have, at some time, been supplied to KIWIreviews by the company for the purposes of unbiased, independent reviews. No fee was accepted by KIWIreviews or the reviewers themselves - these are genuine, unpaid consumer reviews.
Available:
Aug 28th - Sept 25th

A Doll's House traces the awakening of Nora Helmer from her unexamined life of domestic comfort. Dominated her whole life by either her father or husband, Nora must question the foundation of everything she believes in when her marriage is put to the test.

Henrik Ibsen is considered the father of modern drama and one of the world's most influential playwrights. Written in 1879, A Doll's House, is as powerful today as 100 years ago.

His most famous plays include:
Ghosts, Peer Gynt, An Enemy of the People and Hedda Gabler.

As a theatre baby I haven't had much experience of stage acting, The Dolls House performance at Centrepoint being my virtual baptism into the world of theatre.

Overall I found that I rather enjoyed seeing The Dolls House. The story itself is quaintly fascinating to an independent 21st century woman. The play follows the story of Nora Helmer and her personal turmoil, as a small and well intentioned crime she committed in the past comes back to haunt her.

Throughout the play we get a fascinating insight into the past and the social conventions of that time. It also manages to highlight the falibility of all humans, and how small mistakes can lead to cathartic moments. One cannot help but be affected by the morality of the story, and the contrast between relationships of their time as opposed to our 21st century attitudes hits hard. But somehow the story remains relevant to our modern psyche. Ibsen's play obviously stands the test of time.

I was especially impressed with Conrad Newport's portrayal of Torvald Helmer, the unsympathetic example of male inadvertent dismissal of women in such times past. Mr Newport managed to bring the character to life so well that I found myself reacting with some emotion to the character. Unfortunately, in contrast, I found Rosella Hart's portrayal of Nora Helmer to be a little bit too emphatic for my liking. Generally I enjoyed the performance and feel that the actors did an adequate job of story telling, but at times the tendency towards over acting was a mild distraction and I was left feeling somewhat ambivalent about the character portrayals.

A bitter-sweet tale of a naive girl who has led a very sheltered life, and who is suddenly thrust into the real world when a crime from her past, committed for the right reasons, comes back to haunt her. This play has so many points to be made I found it a little overwhelming in places.

Some of the key elements that stuck out for me were:
•  This is a small world, be careful what you do to whom. You never know when they will be the one holding the winning hand.
•  Even the best reasons mean nothing in the eyes of the law. Illegal is illegal, even if it is done for the greater good.
•  You can trust your friends. You can trust those who love you. But be wary of the ones you love. They are the ones whose motives you can least understand sometimes.
•  The worst situations bring out people's true colours. The colours aren't always bright and shiny.

Another astounding performance from the players of Centrepoint Theatre. After seeing Spreading Out it was good to see some familiar faces appearing again, however I was a little put off by the over-performance of the lead actress. She was great as the teenage daughter in Spreading Out, but the serious tone of this play was drowned under her sheer power of presence.

Overall, I still really enjoyed the show, however a personal matter had me slightly distracted, meaning that I didn't get the most from the show. I am sure a regular theatre-goer would get much more from this play... despite being written over a century ago, the references still ring true.

With the scheming Sir Humphrey Appleby in the exalted position of Cabinet Secretary, Hacker finds his feet as Premier of some importance.

Contains the following episodes:
- The Grand Design
- The Ministerial Broadcast
- The Smoke Screen
- The Key
- A Real Partnership
- A Victory for ... more...