The League of Extraordinary Gentlemen review

ProdID: 35 - Fission Impossible : Round Two of the Galaxy Game
Written by Phil Janes 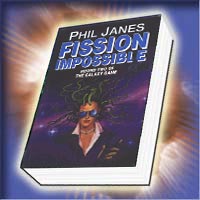 Fission Impossible : Round Two of the Galaxy Game product reviews

Being manipulated by mega-beings so advanced that they created history as we know it (Dan Quayle was an idea they can confidently call their own) and who treat the galaxy as their own personal theme park is not that easy...

Not when you are armed with the inspiring knowledge that failure in the next round of the Galaxy Game means death. Nor when you have been landed with a new team member called Fonking Fission, whose acid tongue goes off the pH scale.

And thus our, erm, intrepid team set off once more, this time to bungle their way across a series of planets, accidentally hypnotise a knackered dragon who has been waiting 3000 years for someone to show up and fight for the Golden Fleas, fend off the deadly Medusa - is she REALLY an estat agent? - and land Arnold in the Jeux Sans Frontieres from hell. And this is just the second round of the ultimate space farce.

Score: 5.7
Product reviews for listing 4532: So Much Closer
Written by: Susane Colasanti

Scott Abrams is the love of Brooke's life. He just doesn't know it yet. So when his family moves to New York City, Brooke has no choice but to follow Scott. It's her last chance to prove to him that they're meant to be together.

But the city is full of surprises that Brooke never expected. Ever since a painful family trauma, she's been closed off to her parents, to her friends, and even to herself. Now, ... more...