« The Courts of the Feyre - 3 - Strangeness and Charm review 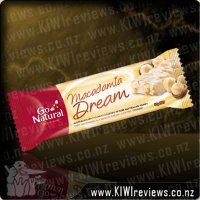 Australian macadamia nuts coated with a dollop of pure honey and smothered with our tangy coating. The flavours combine to produce a dreamy natural taste experience. An all natural indulgence.

I am not really one for yoghurt-covered bars. Yoghurt in general isn't really my thing. So taking this one on board was going to be a tough call, and I regret to say that though the insides were very tasty and appealing, the outer shell ruined it for me.

Plenty of goodness under the outer coating, and I have to admit that unlike most yoghurt-covered bars there wasn't that strange almost-fruity-white-chocolate sweetness that is just plain horrible to me, this bar had a far more mild yoghurt flavour which I am putting down to the fact they used honey as a binding and sweetening agent, so didn't want to overdo it with the yog. Full praise for that smart choice!

It was really easy to see, and believe the 40% Macadamia content advertised on the pack, and the 25% yoghurt content showed that tit wasn't so much a coating as a 'skeleton' to hold the bar together, if you will. It wasn't just a shell, it went right through the bar. That is what stopped me from just chipping it off and snarfing down the yummy macadamias and puffed rice inside. More's the pity, I could have handled that.

Overall, though it really wasn't my thing, I could still see how healthy it was, and how little there was for anyone health-conscious to worry about. On the pricey side, for sure, but keeping in mind that Macadamias are one of the most expensive and labour-intensive nuts to work with, and it's imported from Australia, the price wasn't too far out of realistic bounds. Could be worth a shot if you have a few spare coins clinking away in your pocket and want something different but healthy.

The first thing that I will mention is that I wish it had said that the coating if yoghurt on the front of the wrapper. Had I not looked at the ingredients, I wouldn't have known, and had I bought this, would have wasted my money as I am NOT a fan of anything yoghurt coated.

I gave it a try anyways. The yoghurt was far too sweet for me, and so the two bites I managed was more than enough for my tastes. I also found it very hard to bite into, which also puts me off buying this. So I passed it on to my husband to finish off.

My husband quite liked the bar. He did find that it was a little too chewy, but other than that happily finished off the entire bar. He would happily buy this again. So, I think this would be another stocking filler for him, but not one that I would seek out.

The wrapping of this bar makes it look like a great product. And it is.

It sure is hard believe that only 40% is macadamia nuts, as when you bite into this bar it is absolutely packed, which is great to see, you don't want filler product jammed in there as well.

I'm not sure if any other reviewers out there will mention this, but this was so incredibly sweet for me, I could only cope with half, and had to have the rest at a later date, first time this has happened to me. So not sure if I had a one off bar that had a huge dose of ultra sweet honey or what.

But it was a nice bar, great texture, flavour, and the macadamia's made a nice change from peanuts etc.

I'm guessing the price is what it is because of the price of the nuts used inside it, which makes sense, but I'm not sure for the price if I would just go buy one.

I have recently tried the Go Natural Macadamia Dream bar. This bar features macadamias covered in honey and then coated in yoghurt. Puffed rice is also listed as an ingredient.

This bar is pretty much exactly like the Divine bar in this range. The only real difference is that the coating is yoghurt instead of carob. I found the bar itself was harder to bite into. The honey had gone like brittle toffee, compared to the chewier consistency of the Divine bar.

The yoghurt was a subtle sour flavour. I love yoghurt coated foods, like raisins and nuts so this was a real hit with me. The flavour of the macadamia nuts shines in this bar. The nuts aren't overshadowed by the honey or the yoghurt but more complimented by those ingredients. For this reason I have to conclude that honey and yoghurt are the better macadamia delivery system.

I did have to use some scissors to get into the packet. The packaging was really upmarket looking. It looks like a luxury item and feels a bit naughty. But it feels less naughty than my tim tam slam addiction.

I loved this bar. It was just my sort of thing, and would be my first choice if offered the Divine or the Dream in future.

Go Natural's Macadamia Dream is full of crisp macadamia nuts. The packaging states 40% but I would have thought it was more than that. When you bite into it all you see are macadamias. The honey gives it a delicious sweetness, but not sickly sweet.

The description on the packet says it is smothered in a smooth creamy coating. I was expecting it to be a white chocolate (I suppose because that is what a Cadbury Dream bar is) and was pleasantly surprised to taste yoghurt. The list of ingredients confirmed it was yoghurt. The yoghurt coating complimented the other ingredients.

The whole bar was satisfying indulgence. I certainly didn't feel guilty eating it as macadamias have great health properties that my high cholesterol appreciates. I was very generous and shared my bar with my husband and he also enjoyed it. These bars are proud to be Australian with the packaging boasting that both the honey and the nuts are from Australia.