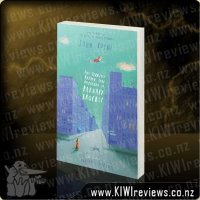 The Terrible Thing that Happened to Barnaby Brocket product reviews

There's nothing unusual about the Brockets. Boring, respectable and fiercely proud of it, Alistair and Eleanor Brocket turn up their noses at anyone strange or different. But from the moment Barnaby Brocket comes into the world, it's clear he's anything but normal. To the horror and shame of his parents, Barnaby appears to defy the laws of gravity - and floats.

Little Barnaby is a lonely child - after all, it's hard to make friends when you're ten feet in the air. Desperate to please his parents, he does his best to stop floating, but he just can't do it. Then, one fateful day, Barnaby's mother decides enough is enough. She never asked for a weird, abnormal, floating child. She's sick and tired of the newspapers prying and the neighbours gossiping. Barnaby has to go . . .

Betrayed, frightened and alone, Barnaby floats into the path of a very special hot air balloon. And so begins a magical journey around the world; from South America to New York, Canada to Ireland, and even a trip into space, Barnaby meets a cast of truly extraordinary new friends and realises that nothing can make you happier than just being yourself.

One can't help but love Barnaby Brocket's tale. Born with the ability to float (or more so the inability not to) Barnaby's life was never going to be normal. Unfortunately all Barnaby's parents wanted was a "normal" child so they do very little to try to get to know Barnaby or accommodate his "floating".

This is such a delightful story that contains lots of travel and very many lessons along the way.

Barnaby (at the age of eight years when he embarks on his world tour) has the ability to make friends and make use of his friends and learns, through his rather intrepid adventures, that really nothing can make you happier than just being yourself.

This is a remarkably easy book to read and indeed a very pleasurable one. Well written in a way that will not only appeal to its intended young reader but all ages. It contains so many funny little incidences and descriptions that I found myself chuckling aloud at times. Oliver Jeffers has illustrated this book with some delightful black and white drawings that will engage the younger reader.

This book will give you a yearning to travel if you are young ( or some very fond memories if you are old ) and some very lovely value-based messages about what is normal - or not - and the value of friends, being kind, being yourself and following your dream.

I think this book would be appropriate for the young reader as soon as they have the ability to read all the words. Or you could read this a chapter a night as the content is completely fine for a younger child. I should think you could have this on any boy or girl readers book case from about the age of eight years and up for their own perusal.

A truly lovely book that I can't wait to share with my children.

Michael Seed 's childhood was nothing but a daily ordeal of unspeakable neglect, misery, and abuse from a father whose tyranny of fear stole Michael's formative years from him and drove Michael's mother to suicide. After years of silence, he now feels ready to tell a story that, though shockingly painful, is a testament to one human's remarkable ability to triumph over the most appalling of circumstances. Living with his adoptive parents, life ... more...