ProdID: 3453 - Winter Be My Shield
Written by Jo Spurrier 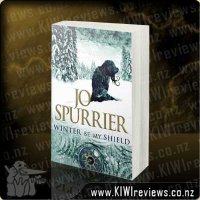 Disclosure StatementFULL DISCLOSURE: A number of units of this product have, at some time, been supplied to KIWIreviews by the company for the purposes of unbiased, independent reviews. No fee was accepted by KIWIreviews or the reviewers themselves - these are genuine, unpaid consumer reviews.
Available:
At Bookstores

Winter Be My Shield product reviews

Sierra has a despised and forbidden gift - she raises power from the suffering of others. Enslaved by the King's Torturer, Sierra escapes, barely keeping ahead of Rasten, the man sent to hunt her down. Then she falls in with dangerous company: the fugitive Prince Cammarian and his crippled foster-brother, Isidro.

But Rasten is not the only enemy hunting them in the frozen north and as Sierra's new allies struggle to identify friend from foe, Rasten approaches her with a plan to kill the master they both abhor. Sierra is forced to decide what price she is willing to pay for her freedom and her life,

Original, dramatic and unputdownable, WINTER BE MY SHIELD is the first in an epic fantasy trilogy from brilliant new Australian talent Jo Spurrier.

Highly disappointed in this book.... where's the rest?!?! No, I know it's a trilogy, I just want to read the rest of it now! Now! *stamps feet* I can't believe this was written by an Australian; the winter setting is so realistic and believable you can feel the snow swirling around. There was only one phrase that reminded me she was; "As useless as t$%s on a bull", which always makes me giggle anyway. The characters were great; we haven't really met the baddies properly yet, I'm sure that's to come later in the series. The heroes (for want of a better word) come across as human and likeable and all the mage magic seems plausible in this far away land.

I don't read that much fantasy and to be honest I don't think this is too fanciful, there's a good story line with a beginning and a middle and ,hopefully after another two books, an end. It's very readable, I managed it in a couple of days, and for some reason reminds me a little of the first books in the Clan of a Cavebear series, not sure why! I really hope the other two books are released soon and they keep up the pace of this one. Highly recommended.

Winter Be My Shield is very different to the books I usually read. I haven't read anything that was a true fantasy before. The world of mages and their battles is totally new to me. My husband was very surprised that I had selected this book to read. It is hard for me to say how an avid fantasy reader would find this book.

This book is the first in a trilogy. As expected it was mainly about introducing the characters and setting to the reader. I found it hard to follow the characters were as many of them were referred to by a couple of different names, even the term one clan used for themselves was different from what another clan called them. A list of characters at the start of the book would have really helped me.

It is 457 pages long with most chapters about 12 pages long which suits me well. They are not so long I am screaming for a break but not so short I can't get into the book before putting it down especially when I tell myself only one chapter before I turn the light out. It is following several different characters' stories at once which make it hard keep up with at times and made even more confusing when some conversations were telepathic or flashbacks.

I did read the whole book but at times it was a struggle, mainly because of my lack of comprehension. Although I am curious to see what will happen to the main characters in the sequels I don't think I'll be reading them.

Score: 8.5
Product reviews for listing 501: SHINE: Make Them Wonder What You've Got -  Written by Newsboys

Shine: Make Them Wonder What You've Got is a unique glimpse into the lives and faith of one of the world's top Christian bands-and a call for believers of all ages to enter into a deeper spiritual life of surrender, service, and joy in Christ.

With great personal feeling and conviction, the Newsboys share openly about their spiritual journey to greater intimacy with God - seeking God and ... more...