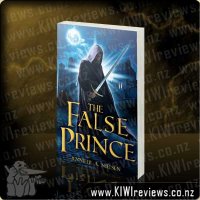 Disclosure StatementFULL DISCLOSURE: A number of units of this product have, at some time, been supplied to KIWIreviews by the company for the purposes of unbiased, independent reviews. No fee was accepted by KIWIreviews or the reviewers themselves - these are genuine, unpaid consumer reviews.
Available:
July 2012

THE FALSE PRINCE is the thrilling first book in a brand-new trilogy filled with danger and deceit and hidden identities that will have readers rushing breathlessly to the end.

In a discontent kingdom, civil war is brewing. To unify the divided people, Conner, a nobleman of the court, devises a cunning plan to find an impersonator of the king's long-lost son and install him as a puppet prince. Four orphans are recruited to compete for the role, including a defiant boy named Sage. Sage knows that Conner's motives are more than questionable, yet his life balances on a sword's point -- he must be chosen to play the prince or he will certainly be killed. But Sage's rivals have their own agendas as well.

As Sage moves from a rundown orphanage to Conner's sumptuous palace, layer upon layer of treachery and deceit unfold, until finally, a truth is revealed that, in the end, may very well prove more dangerous than all of the lies taken together.

An extraordinary adventure filled with danger and action, lies and deadly truths that will have readers clinging to the edge of their seats.

Nee Naw and the Cowtastrophe
Rating: 9.9

The False Prince is a delightful book filled with lies and dangerous truths. The way the author has created this book filled with numerous hidden secrets and lots of lies that cover the real plot is mesmerizing. It is a very impressive book and should be a treasured book for any household with children. The beginning of this book is very sudden and unexpected which makes it all the more exciting. The beginning also includes some unexpected thoughts with add humor to the book. This book is set in an imaginary, olden-day land where the entire royal family have been poisoned.

The middle of the book is where the bulk of the unexpected surprises are hidden. The clues at the beginning and the middle of the book gives subtle hints for the ending. The characters get more developed during this part of this book, each with different strengths and weaknesses. Each character forms bonds with each other in a different way some becoming enemies and others becoming friends or allies. The truth is so hidden in lies in this part of the book that it is near impossible to guess what happens next making this book very captivating.

This is where the master plan is revealed and the end is when all the truths are revealed each bigger than the next. But the book gets no less unexpected and friends can suddenly blossom into your greatest nightmares. This is all the more proven during the duel in the tunnel to the castle. The way the Prince had to prove who he is in the castle is important and it is well planned and also shows the importance of the golden rock that was mentioned in the middle of the book.

This book has a bit of roughness to it such as children getting a beating, death, murder and lots of knives and swords so I wouldn't recommend it to young children. The hilarious antics and wits of Sage keep me occupied as I read and add a sense of humor to this book. I can't wait until the last book is published and I hope it will be as good or better than the first.

The False Prince is the first book in The Ascendance Trilogy, and when I finished this book I was incredibly thankful that there are more to come while, at the same time, upset that I did not have the next instalment of the story right NOW.

At the end I found myself with warring, contradicting emotions as half of me wanted to finish quickly so that I could find out what happens while the other half wanted to slow down a savour each word. I couldn't put the book down but it was late and I was getting tired so alas down the book went. But first thing in the morning the book was picked up again and continued to read.

The voice of Sage, hooked me from the very first page. He is clever, witty and self-deprecating. He interjects a wonderful sense humour into the most serious of situations and is able to manipulate the other characters into playing along in his grand master plan. His antics left me literally laughing out loud, shaking my head or asking 'why can you not keep your mouth shut!' (most of the time, sometimes all three) in the most wonderful of ways.

Sage is a very lovable character in the book that the reader to drawn into liking whether you want to or not. Sage is the type of character that is impossible not to root for and I truly feel that he will appeal to both male and female readers, and readers of all ages. Yes he is a kid in the book but adults can relate to his fight against what is right, and would feel a sense of being proud that a young man has such great morals.

The plot unfurls slowly but steadily, with secrets and betrayals around every corner. There was not a single moment when I was bored or wishing for more action. This is one of those books in which seemingly insignificant details will later be revealed as integral to the plot. I adore books where all the puzzle pieces seem to fall into place, creating a finished piece that is full of detail and leaves the reader reflecting on all of the moments that brought us to this place.

I can't wait until the second book comes out so I can see what happens next. Also I can see myself reading this again, as I think in parts I did read it too fast and probably missed many integral details that I will see when I read the book again. I great read if you like action, fantasy and the battle between good and evil. I found it to be a great read!

It took me a little while to pick this book up, mostly because the pile was a bit higher than anticipated but once I read the first few pages I was hooked. I was also kicking myself for letting this get so low in my priorities. This is a seriously addictive book. I do love fantasy books. I've read loads of different authors, mostly written for adults. This is a young adult novel, but it never felt like it! You never got the sense that you were being given more information than needed. Nor did you feel like the author was shielding you from the harsh world the characters live in. The book itself is relatively PG. There's no sex, but there is plenty of violence. I didn't find it too gruesome though, which is the mark of a good young adult author. Its there but its not so graphic that you'd want your teen to stop reading it.

I spent most of yesterday with my nose stuck in this book. To the point where I realised around 6:30pm that I should cook some dinner for the kid to eat. Then went straight back to reading once my parental duties let me go. I finished the book at 1am because I knew I would have been wide awake all night wondering otherwise. As it was, everytime I woke last night it was because thoughts of Sage and the others and "what next?!" kept coming to me. I really can not wait for the next book. There are so many strings to tie up and I can't wait to see where she goes with it all.

I think what I loved the most about this book, was the main character. He is a loveable rogue. He has a gift with words, is cheeky and defiant. He is street smart and brave in a way others fail to be. And he has a great sense of ethics and fairness. I loved sitting in his head, and I loved all the reveals that happened along the way. Price-wise I think its fair for th size of the book and the fact its hardcover. I'm not a great re-reader but I'm sure once my daughter can read fluently she will give this a go and I will be recommending it to my husband who also reads a great deal of fantasy novels.

I really, truly loved this one. It's not as well written as some of my favorite fantasies are, but, nevertheless, it was great. Maybe just because it's first person narration, told from Sage's point of view (not all of it, but you will see that as you go) and normally high fantasies delve a little more into a poetic writing when written in third person. But Sage's voice seemed very modern and witty, which was one of the things I loved about him. While the writing doesn't reach perfection, it is still well enough written that it flows well and is so easy to follow along with.

Sage is a great character and so easy to get on his side and want him to win and that left me thirsty for the sequel. I seriously cannot wait. This will be one of my most-wanted next year. Nielsen manages to give us a narrator that keeps us entertained while withholding bits of information, in a rather brilliant way. We find things that Sage has done throughout that he has never mentioned, and at first this bothered me, but ultimately I saw the amazingness in it.

While there is not too much world-building in this one, because the boys are prisoners, I felt comfortable in their world and I expect to see a lot more insight to the Kingdoms in the next one. Chapters are very short making this a very easy read. What I liked the most, besides Sage? Shocking twist. That's always a big plus in a book. Count this in your Fantasy list for this year!

Wow! is a fantastic new series that is full of only the best and most amazing facts. Wow! Animals is full of extraordinary facts about a wide range of creatures. Discover that goats have rectangular pupils, that gorillas can catch human colds and that rhinoceros beetles can carry up to 850 times their own weight.

This is a lively, fun book about animals that is certain to make you say Wow! again and again.