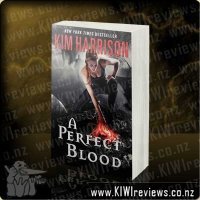 Ritually murdered corpses are appearing across Cincinnati, terrifying amalgams of human and other. Pulled in to help investigate by the FIB, former witch turned day-walking demon Rachel Morgan soon realises a horrifying truth - others want to create their own demons and to do so, they need her blood.

She's faced vampires, witches, werewolves, demons, and more, but humanity itself might be her toughest challenge.

The latest instalment in the Rachel Morgan saga (aka The Hollows), this is a lot more well paced than some of the earlier titles. The cast is a bit more balanced, and we gain further insights into the power structure behind the hidden string-pullers. Those in power are not always the ones with the power - sometimes the puppeteers are themselves puppets, as this story shows.

Rachel has been out'ed as a daywalking demon, and the true history of Witches is starting to become common knowledge. This makes things very tough for Rachel as the only one of her kind - hunted as ally, trophy, target and slave, she has only just escaped the clutches of Al in the everafter and is hidden by Elf magic by a charmed silver band she wears. The down-side... she's basically powerless since it also blocks her access to the Ley Lines. How will she cope is not as important a question as how will she survive long enough to find a way to cope. With few allies, fewer friends, and even less hope, Rachel has to play a hard and desperate game and risk everything, in order to get back even the slightest sliver of her own life.

Harrison once again takes us on a willful and thrilling ride through the rollercoaster that is life in the world after The Turn. Rachel is an amazing protagonist - at once vulnerable to all the human foibles and follies, yet also one of the most powerful female roles I have come across in years... and though she has grown over the course of the series - 11 books in total so far if you count the companion title "The Hollows Insider" - this story really starts to show her growing up. The truth about the world she lives in, the truth hard fought for and won, is slowly waking her up to her role in the future of not one, but all the races. She alone holds a key that could unlock a better, or far far worse world for everyone... and strangely enough, she's kinda scared.

The fear is not helped when she discovers and undercover group who are experimenting on witches to try and create a demon... one they can use to kindle a magic curse that will destroy every non-human race that walks the earth. An inescapable, magic-plague that will find anyone not human and erase them utterly, painfully, and forever.

Overall, I was seriously impressed. This is probably the best title in the series, IMHO. Far more revealing, not only for Rachel, but about Rachel, the Witches, their history and potential future. If you want a story with a lead character who combines the best elements of James Bond, Gandalf and -insert your vote for hotest swimsuit model here- then you can't ask for a better book to read!

We crowded round the windows
to see what we could see,
as it began to make a hole
where the pool would be...

The famous Little Yellow Digger is coming to school to dig a swimming pool! The children are hugely excited. And when the digger bursts a water main, they get an unexpected field trip! This is a new edition of a much loved favourite in this best-selling series.