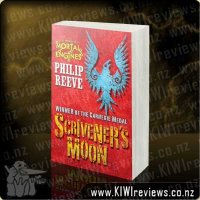 The Scriven people are brillianr, mad... and dead.

All except one, whose insane creation is nearly complete - a giant city on wheels. New London terrifies the world beyond and armies determined to stop it are gathering to attack.

Young Fever Crumb is at the horrifying heart of the great war that is about to change the future of the human race...

Sitting third in the over-arching "Mortal Engines" storyline, this is also the third in the "Fever Crumb" sub-plot, and reveals a lot about the history of the Scriven race, including its origins, and the reason behind their very existence.

As with all stories that are worth reading, characters come and go - we lose old friends, and enemies, while new one rise to take their place. Such is the way of things that a good author can make these comings and going feel smooth and just 'right'. In this case, Reeve's story is at once thrillingly different to to anything we are used to, but also a somewhat distorted mirror of the world we are all familiar with. His ability to seamlessly blend all the various elements of the plot is nothing short of magic. Those who leave the story do so in a manner utterly consistent with their character, while the new players enter in a manner so elegantly smooth that it's hard not to feel as though they were always there, but just standing in the background the whole time waiting to be noticed.

I was particularly impressed with the three levels of technology that all managed to cohabitate comfortably - the ultra-high tech behind the Stalkers, the relatively "today" level technology used to create it, and the rather "Steampunk"ish technology the survivors considered the pinnacle of achievement in their era. For me, this contrast only served to highlight the mentality I see around me today: "This is where we are, we are destined for greater things, but failure will be for our decendents to survive, if they can." This book also brought into sharp focus the concept of "aiming to climb higher than we could survive if we fall" from the perspective of those left behind, the whole idea of "Why do we want to be like gods, when the gods clearly killed themselves with their own power?" Do we really NEED the amazing technologies we dream of, or are we better to slow down the race towards technotopia and see if we can mature into the technologies we have right now. Growth and maturity as a species is far more important than advancing beyond our ability to cope with the results of our explorations.

Overall, this was a thrilling book on it's own. Having read all the previous titles, it was easy to see where the background information was relevant, but in all honesty I felt this book could easily stand on its own. If I had picked this book up as my first encounter with Reeve's works, I would have found myself just as enthralled and keen to go back and read all the earlier works - not to fill in major plot holes, but just to see more of the world he has built in his Mortal Engines universe. If you have never read his work... please, try some!

year is 2312. Scientific and technological advances have opened gateways to an extraordinary future. Earth is no longer humanity's only home; new habitats have been created throughout the solar system on moons, planets and in between. But in this year, 2312, a sequence of events will force humanity to confront its past, its present and its future.

The first event takes place on Mercury, on the city of Terminator, itself a miracle of ... more...