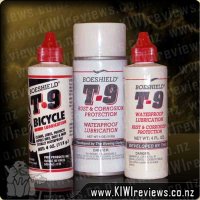 Boeshield T-9 has a unique formula and is silicone free. It's blend of waxes and solvents penetrate deep in to the pores of metal surfaces when applied. It dissolves minor corrosion and, once the solvent evaporates, leaves a lubricating wax coating that is 100% waterproof and will last for months.

Having just bought a new bike at the start of the year, and knowing that the winter months can be utterly horrific in this part of the country, I was keen to give this stuff a try on all the important bike bits that need weatherproofing; chain, gears, cables, joints, bolts... basically all the metal bits. Application couldn't have been easier - just a small dribble on a clean cloth and rub it directly onto the required areas!

The only trick bit was working out how to get it evenly all over the chain. This was soon solved by some lateral thinking... and the sudden realisation that the T9 I had put on the gears was already starting to appear on the chain too! So.. flip the bike over and crank the pedals around briskly, but not so fast as to cause spray-off. Then just drip the T9 onto the chain where it engages with the rear derailer gears. It took a while, but after 7-10 minutes I could see the chain was well coated.

The real test was the inspection of the chain a few months later after the wet weather had done it's duty on the bike. Not a spot of rust! As a 'control' I had exposed a spare seat post to the same conditions as the whole bike, and it had rust-spots forming in half a dozen places. That was good enough for me to know that the T9 had done its job well!

Being paraffin-based, the T9 is a lot more resilient against being washed or rubbed off, but it doesn't leave a thick build-up if you decide to apply a second coating. It binds to the metal smoothly and evenly, giving a waterproofing second only to galvanisation, IMHO. The bottle, though small, still has plenty left in it - enough to easily give a similar top-to-toe coating to at least half a dozen more bikes of a similar size - that being an 18-gear adult town bike. If you were to use this on a more outdoors-oriented bike, you would probably want to do 2, or even 3 coatings to ensure you got coverage in all those awkward little spots, such as where the spokes join the wheel rims... the spots that are going to get hit the hardest by being almost constantly under mud, water and/or God only knows what.

Overall, $20 will pay itself off the first time you DON'T have to replace a rusty part... and if that part were to give way while you were going downhill at top speed... well... doctors cost a lot more than $20! So do funerals. It's worth thinking about really... health insurance and investment protect all in one small bottle... and this is only one possible use for it!

This high performance boomerang flies out about 90 feet - and then really comes back!

Soft rubber edges for comfortable throws & catches, and available in a range of bright colours that are easier to see, and with a triangle shape that's easier to catch.

Patented design for unsurpassed performance, and made in the U.S.A.