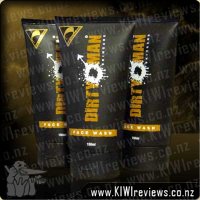 Disclosure StatementFULL DISCLOSURE: A number of units of this product have, at some time, been supplied to KIWIreviews by the company for the purposes of unbiased, independent reviews. No fee was accepted by KIWIreviews or the reviewers themselves - these are genuine, unpaid consumer reviews.
Available:
Via online store and at selected retailers

Filthy faces impress no one so use our Aloe infused face wash to sooth and cleanse your skin. DirtyMan Face Wash will gently cleanse your skin and regular use will banish blackheads from your life.

Face wash is best used each day in the shower and before shaving to soften and prepare skin.

Shower Stool With Back Support
Rating: 8.8

As an older male I find it tough to admit I still get oily skin some days. If the wind is really strong and the air is cold, or if I have been working hard outside, my skin seems to want to put on an oily coating across my forehead and down the sides of my nose. This can be very hard to cope with if we are having a hangi and I am on fire duty, as the ash and soot sticks to my face in a very clear pattern. Using regular soap is pointless, because it just makes the oiliness worse about 20 minutes later. I really was not expecting this to be any better.

I have to say, it did a much better job than I expected but not as good as I was hoping for. It cleaned up the oily patch very quickly, and was easy to use, with a smell that wasn't chemical or overpowering when it came time to washing it off and it got into the steam. 20 minutes later the oily patch hadn't come back worse than before, but an hour after I washed this off the oily patch was starting to reappear. On the positive side 3 hours after use, the oily patch was back at full force but it wasn't any worse than normal, and that is a real improvement over normal.

I think I would really only use this just before serving up the hangi, so that the whanau and guests are'nt greeted by the sight of someone looking like an aged extra from a low-budget zombie movie handing them a plate of food. Apart from that, as good as this product is, it really didn't appeal too much for me. Still, for those who use it regularly over a period of time, it could prove to be a great product. I can't say for sure, because at the rate I am using it, I don't think one tube is going to last me more than a few more days.

We really liked the packaging for the Dirty Man products. These are in a nice matte black tube with raised shiny wording. It looks striking, and manly too.

This face wash comes out easily from the tube. The fragrance is very light. It mostly just smelt like soap to us. That's not a bad thing though. Some people have bad reactions to overpowering fragrances and some "male" fragrances are pretty rank. This was an acceptable level of smell. Plus it didn't interfer with the smell of his aftershave.

The face wash lathers pretty well. It really didn't take a lot of effort to wash your face with and was really easy to rinse off as well. It seemed pretty effective but my husband doesn't have problem skin. So, it is hard to tell if this would be useful to someone with really bad acne.

We stored this in the shower cabinet and did find that the lid filled with water over time. But this wouldn't be an issue if you stored it near your vanity instead. The price on this product isn't too bad compared to other products, and given the volume you get. We found that you didn't need a lot of the product for each use.

This face wash from Dirty Man Skincare comes in an attractive, easy-to-use tube that will look right at home on any bathroom shelf.

The face wash contains Aloe Vera and is easy to spread on your face. It left a pleasant natural fragrance that was not overpowering. The face wash does lather up nicely and comes off easily.

All the Dirty Man Skincare products are superbly packaged and designed, with gravity feeding the product into a nozzle at the base. Squeeze their tubes with care as you don't need to squeeze hard to get the product out.

My husband can be obsessive about washing his face, so wasn't too sure about trying something new. Took a couple of days before I convinced him to give it a go, and once he did he came out of the bathroom going on and on about how great it was.

He loved that it feels like a really good clean, doesn't feel like just one layer of grime but all the grime is being gotten rid of. He likes the smell, and once again loves the fact that you need very little to do a really good job.

I can see us buying this again in the future as well.

I've never really been one for buying a dedicated skin care product, let alone using any skin care products beyond shaving cream.
I have to say I was thoroughly impressed. A lovely masculine fragrance infused into a low foaming face cleansing product.

I first used this product during my daily shower and haven't stopped using it. A little goes a long way making the product fantastic value for money. my face felt clean and refereshed afterwards.

It is designed to be used in conjunction with the rest of the range, and I did use it after using the scrub and also before the shaving cream. I can't understand why I've never really considered using a men's skin care range before. It's not just for the metro boys - anyone can use it.

I've never really suffered from skin problems and I guess this is the main reason I have never bothered with skin care products other than soap or shaving cream, and never a moisturiser; but I do have to admit my attitude has changed. Hat's off to Dirty Man for a fantastic range.

The Dirty Man face wash has a lovely masculine fragrance which matches the other products in the Dirty Man range. Once one of us had used it in the shower it left the bathroom and our skin smelling great for hours. It also made me feel clean.

Both my husband and I are prone to acne and we found cleansing daily really helped keep the blemishes under control. This didn't dry out our skin in the drier patches either. It was great value for money and suited us both so will become a staple in our home.

I had very greasy hands, as a result of having to replace my hubcap, and grabbed the face wash to clean my hands. It worked fabulously. My hands were instantly clean and the water going down the drain was very black. Not only is it a great facial cleanser it is also a great degreaser.

Sunsilk has once again teamed up with Yuko Yamashita, international Straight Hair Expert from Japan, to co-create the Sunsilk Straight range - a hair care and style solution for women who want to lock in their straight shape, direct from the shower.

Yuko, a global leader in straightening, says, "I have sought to re-create the magic moment between wet and dry hair, when your hair looks perfectly straight and beautifully ... more...