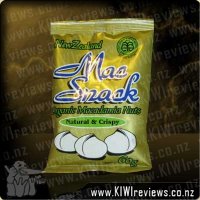 Disclosure StatementFULL DISCLOSURE: A number of units of this product have, at some time, been supplied to KIWIreviews by the company for the purposes of unbiased, independent reviews. No fee was accepted by KIWIreviews or the reviewers themselves - these are genuine, unpaid consumer reviews.
Available:
via the company website, at selected quality retailers and Farmers Markets

Our Macadamia Nuts are grown chemical-free and naturally fertilised, giving you a safe, healthy, nutritious and flavourful nut.

Macadamia Nuts are rich in beneficial Omega-3 polyunsaturated oil. Macadamia Oil has the highest level of C16:1 (Desmethyl) of any known plant oil and the lowest levels of Omega W6 fatty acids of all culinary vegetable oils. 5 to 20 Macadamia Nuts a day has proven to lower cholesterol levels.

Natural & Crispy are the nuts as nature intended them - unroasted and unsalted.

I'm a huge nut fan but macadamias are one of the only nuts I have not tried without them being surrounded by cookie dough or chocolate :)

The packaging was attractive and appealing and easy to get into and the amount was just right. I found the plain macadamias a bit too bland to eat by themselves so I decided to use them in some baking. I made a chocolate chippie dough and added some of the nuts chopped up into smaller pieces. The end result was delicious and hard to stop at just one :)

The only thing that will stop me buying these often would be the price, maybe around the $3 price but not up to $6

Ok first and foremost I just have to say these are great in that they are organic and completely natural, sadly they are not for me. I have never had macadamia nuts until I was given these to review, and it would appear the natural flavor of macadamia is not one I like, from a family of 5 only one person liked them enough to finish the packet.

The packaging is simple and elegant for all the Mac Snack nuts, and as such would be a lovely edition to a gift basket. The price unfortunately is far to high, but this can be expected for organic products. I also found these ones to be slightly harder than the other two (roasted and golden roasted), and as such they are quite difficult to eat for someone with dentures.

All in all the Mac Snack products are lovely, but the price influences whether they would be purchased again or not.

I love the fact that these taste great and are good for you, what I don't like is the price. But, to splurge every once and a while, this would be my choice of product and nut. I have two very picky children who turned their nose up at these on their own, but seeing as how these are unroasted and unsalted, they seemed to be the perfect thing to slip into some baking, and so that's just what I did.

I tried one on it's own first, but I wasn't a big fan of it (I'm more of a salted nuts kind of girl). But I shoved the pack into the blender and chopped them all up, and I must say that it is the perfect portion size for a batch of cookies. Made up my batch, cooked them and once out of the oven they were hard to keep little hands away. While this won't be in my trolley every week, simply due to price, when it comes to the portion size, the convenience and the taste these will be brought again, without a doubt.

I admit I have never been a huge fan of macadamias, mainly because over the years I haven't had much chance to try them due to their high cost. As a highly labour intensive product - taking months to go from harvest to sale - the price is justified, but still beyond 'casual' buying levels. But, when I got the chance to try real Kiwi macadamias, and organic ones at that, I could not wait to give them a go.

First up it was the plain ones. These are not roasted, and are just seasoned with a bit of sea salt. Simple, and very tasty indeed! Though I admit I found them a little hard to eat, that had nothing to do with the nuts themselves and more to do with a wonky filling causing nerves to play up. If you have dental issues, you may want to look at using these in cooking instead of just crunching down on them. Your call, of course.

Not a lot can be said about these really. If you have tried macadamias before, you will know the flavour and either appreciate the subtle transition the nut goes through as you chew it, from hard nut to a soft, almost creamy, texture as it breaks down while you chew. If you haven't tried them before, then you are missing something really wonderful.

Overall, though I regret to say it, these were my least favourite of the three varieties, but only by the smallest margin. I found myself more taken by the roasted varieties, but that didn't stop me from really appreciating the wonderful flavour of the plain sort too. I have ideas to use some in some biscuits...

These nuts, as with the other Macadamia nuts in the Mac Snack range, are Certified Organic with Bio-Gro.

There is nothing in these nuts to make you feel bad or guilty about eating them. In fact if the back blurb is to be believed these Organic Macadamia nuts should be a regular part of your diet and I almost feel guilty for not eating them more often!!

Containing only Bio-Gro Macadamia nuts this 60 gram packet of 30 nuts (two 30 gram servings) is just bursting with goodness. These nuts taste so incredibly fresh and healthy. I don't know when they were picked but my packet had a best before of 18/10/12 and they tasted amazing. There was no chance of this packet not lasting (it was consumed in mere minutes) but I would actually happily buy these to use in baking knowing I can trust the freshness of the taste. There is nothing worse than baking cookies and then finding the nuts rancid!

The macadamias made the cookies seem more of an adult treat (especially as my children aren't allowed nuts in their lunch box). The nuts were hard to see both in the raw cookie dough and the final product so it was a nice surprise to get a nut in your bite. The nuts remained crunchy even when the cookie was still warm and soft. The macadamia added a great taste to the cookie and helped to balance the sweetness of the chocolate. These cookies were a hit with all my family. I don't think this batch will last long.

I sampled one of the nuts before adding the rest of the packet to the cookie dough. It was bland compared to the varieties with added salt. It would be great combined with other flavours to complement it like in a salad or stir fry.