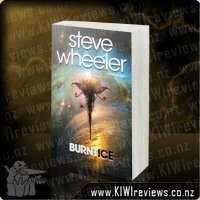 In our future worlds the Administration rules the Sphere of Humankind, the Games Board sanctions and funds wars and conflicts, and the Haulers' Collective roams the space routes like the caravanners of old.

Marko and his crew of fellow soldier-engineers are sent to investigate a largely unknown planet. When they encounter strange artefacts and an intelligent but aggressive squid species, they are forced to embark on a perilous journey far from the Sphere.

They will have to survive not only other alien encounters but also their own Administration's deadly manipulations.

This is an outrageously good read that offers up some interesting possibilities. Although it took me a chapter or two to get a hold of who was who, favourites soon emerged and kept me reading right through. There is adventure, some rollicking fights, and some amorousness amongst the crew, but I really love the ACE's (and the AI's too, whose differences definitely help to show the ACE's personalities). I'm one of those sci-fi buffs who takes a shine to things from stories, but the ACE's... I think everyone would be throwing money at him for their own, I know I would! (ACE's are like little mechanical pets, but oh so much more!)

The idea of the Games Board, recording (and manipulating) events for distribution to the masses is truly terrifying, and probably a heavenly dream for the Rupert Murdochs of the world. They're revulsion-inspiring, always there to mess with things, and then cheerfully congratulate (and richly reward) the crew for their handling of the mess.

This was one of those books that I read and read, even when I was supposed to be doing other things. It was also the first real (ie paper) book I have read for ages. I'd forgotten the joys of turning an actual page, the smell of the newly opened paper, the bookmark (I have a favourite one that I hardly ever get to use anymore), but at one point I was dismayed that the page wouldn't brighten and I had to turn on an actual light!

Many years ago, when I was a part of a "Medievalist" group, I first encountered Steve Wheeler's craftsmanship when I was introduced to some of his steelwork. If someone had told me that a decade and a half later I would find myself seeking every opportunity to sit and read his debut sci-fi space opera novel, I would have wet my gambeson laughing. And yet... here we are...

Reading like a cross between a slightly toned-down version of Peter F Hamilton's "Fallen Dragon" and Robert A. Heinlein's "Starship Troopers" with a touch of "The Abyss" movie thrown in for seasoning, this is a rollicking tale that has almost every ingredient for a hit story in my books - aliens, genetic engineering, advanced weaponry, nanotechnology, artificial intelligences, wargames, FTL flight via wormholes, intrigue, hidden past lives, plot twists that make a bowl of spaghetti look like it's on Dress Parade... un-flaming-beatable.

To take a little of the shine off and put a bit more perspective on though... this is clearly a debut novel for Steve. Though it has been meticulously researched and all the technology in it is within realistic grasp within the next 4 or 5 decades, there is something about the structure that just feels a little loose... but you know what, I love how it comes across! There's no sign of lofty, pretentious prose, no diamond-hard nuggets of techno-babble... it's a fluid story with a lot of potential, and it speaks to the Kiwi in us.

With this opening gambit, Steve has thrown down the challenge to himself to come up with a Part Two that rocks us even harder... I am dying to know the resolution of the thread that ends this book... some elusive hints and a bit of prediction based on reading a LOT of similar stories... and I have my suspicions as to where that thread is going to go... but I can't be 100% sure. That's pure gold.

One of the things you need to know about this book before you read it, is that NO-ONE, not one single character, is really what they appear to be... covert operatives, hidden pasts, resurrection via technology called "Soul Savers" that stores a copy of your entire mentality... it all leads to some seriously twisted personal interplay... You can't really say the characters are well developed with good depth - even though that feels right - because as the story unfolds, you find out that the characters you think are there, are really just masks, and the real character is still hidden. Brilliant!

Overall, Book Two - Crystal Venom - is already in the works and is about a year away from showing itself. I dearly wish I could get a draft copy of it to proofread for him NOW, this has me so gripped... but he's a busy man, and I shall just have to wait.

Money isn't everything ... but it ranks up there with oxygen.' Rita Davenport

Most 21st century women want or need financial independence. According to Sheryl Sutherland, women have different life patterns to men and these greatly affect our ability to save or invest.