ProdID: 3281 - I Don't Know How She Does It
Directed by Douglas McGrath 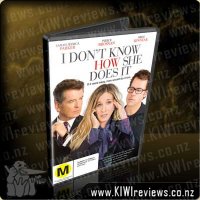 I Don't Know How She Does It product reviews

Based on Allison Pearson's best-selling debut novel and written by Aline Brosh McKenna, this follows the day-to-day life of Kate Reddy, a successful investment banker who struggles to balance her high-powered career with an equally demanding role as a mum.

Kate Reedy devotes her days to a career with a Boston-based financial management firm. At night she goes home to her adoring, recently down-sized architect husband Richard and their two children. It's a non-stop balancing act, the same one that Kate's acerbic best friend and fellow working mother Alison performs on a daily basis and that Kate's super-brainy, child-phobic junior associate Momo fully intends to avoid.

When Kate gets handed a major new account that will require frequent trips to New York, Richard also wins the new job he's been hoping for - and both will be spreading themselves even thinner. Complicating matters is Kate's charming new business associate Jack, who begins to prove to be an unexpected source of temptation.

When I put my name for to review "I Don't Know How She Does It" all I knew was it was a chick-flick. When it arrived and I looked at the cover I didn't think I was going to enjoy it because it starred Sarah Jessica Parker and Pierce Brosnan as well as Kelsey Grammar. These actors tend to irritate me. I couldn't have been more wrong. I loved the movie.

I could really relate to the lead character. I think every working mother can. It is essentially about the struggle to be everything: a great mum, a successful career woman, wife, friend and organise a household. As you can imagine things go wrong and upset the fine balance.

There were a few laughs but not as many as I would have thought. It did have me scratching (all the mums know what one topic will start that). Mainly I felt an empathy for Alison and grateful that my life isn't as hectic as hers and hopefully never will be.

Now that I own the DVD I will probably watch it again and will lend it to other mums. It is certainly a movie for mums. I don't think those without children or dads would enjoy it as much.

It is only 86 minutes long and is a relaxing movie. No real thought is involved. The ending isn't what I predicted. It is actually a better result for Alison.

Set in the aftermath of Hurricane Katrina. Walker plays a new father whose child is stranded in a New Orleans hospital after Katrina hits, leaving him desperate to preserve the child's life.

Before sunrise on August 29, 2005, Nolan (PAUL WALKER) arrives at a New Orleans hospital with his pregnant wife, who has ... more...