There's a Hole in my Bucket review 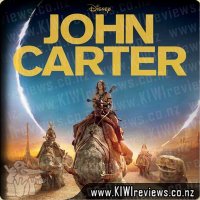 Disclosure StatementFULL DISCLOSURE: A number of units of this product have, at some time, been supplied to KIWIreviews by the company for the purposes of unbiased, independent reviews. No fee was accepted by KIWIreviews or the reviewers themselves - these are genuine, unpaid consumer reviews.
Available:
in cinemas from March 8th 2012

Based on the story "A Princess of Mars" by Edgar Rice Burroughs, from Academy Award-winning filmmaker Andrew Stanton comes "John Carter" - a sweeping action-adventure set on the mysterious and exotic planet of Barsoom (Mars). "John Carter" is based on a classic novel by Edgar Rice Burroughs, whose highly imaginative adventures served as inspiration for many filmmakers, both past and present.

The film tells the story of war-weary, former military captain John Carter (Taylor Kitsch), who is inexplicably transported to Mars where he reluctantly becomes embroiled in a conflict of epic proportions amongst the inhabitants of the planet, including Tars Tarkas (Willem Dafoe) and the captivating Princess Dejah Thoris (Lynn Collins). In a world on the brink of collapse, Carter rediscovers his humanity when he realizes that the survival of Barsoom and its people rests in his hands.

I wasn't concerned at all about watching this when it first came out but my husband really wanted to so we watched it when it came out on DVD, one of those compromises that one makes.

Putting this on it was at first confusing but once you got used to it and it moved into the story of John Carter things were all good. The story wasn't anything special, man ends up on alien planet, helps to fight in a war, falls in love with a native - it's not a bad plot line, it's just happened so often that I don't expect to be surprised, and I wasn't in this case.

The special effects were ok but I thought a lot more could have been done. As a movie overall it was good to wile away a couple of hours but it wasn't good enough to hold my attention and I was on the computer for half of it without feeling like I lost my place at any point.

This movie was ok but I'm in no rush at all to see it again.

I loved watching John Carter, when I first was watching I was a little confused as it was set after he had died, once his nephew read to us the beginning I soon realized that we were hearing about what had happened to him before. This concept soon became accepted as once we went into the story it continued and didn't go back to the nephew all the time.

When we were on earth (Jasoom) it was in 1881, the look and feel of the city in that time looked amazing and seemed to give a genuine feel to it, the clothes of the people and their vehicles looked amazing and seemed real. When we were transported to Mars (Barsoom) the first thing we saw was John Carter waking up and trying to learn to walk with the gravity difference between the 2 planets. and then we run into the green aliens called the Thark, who end up take him prisoner.

We then meet the two human-like nations, Zondanga and Helium who are at war, in this war we get to see their marvelous flying ships, I loved the look of them, they looked both futuristic and alien as well.and the weapon being used from the ninth ray looks powerful and the destruction that it causes brings amazement of what can be thought of as terrifying. I loved how they kept the red sandy look of the planet of Mars, the fighting was truly amazing with the along with the technology. I loved to see a coliseum like ancient Rome, and how his strength allows him to accomplish a victory for his life, then rallying the Thark people to rise up to end the destruction of their planet. The final battle is a little romantic with the princess falling in love with John Carter, the comment of a Thark woman "I love to fly" was quite amusing when the comment of "Thark don't fly".

This is really a movie I could watch over and over again. I can't wait to upgrade my collection of this to blu-ray when possible.

Based on Sir James M. Barrie's 1904 play about the boy who refuses to grow up, this film begins in the London nursery of Wendy, John and Michael Darling. The three children are visited by Peter Pan, the boy who refuses to grow up. With the help of his tiny friend, the fairy Tinkerbell, Peter takes the three children on a magical flight to Never ... more...