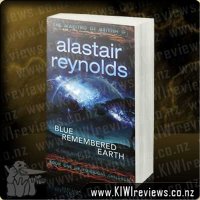 One hundred and fifty years from now, in a world where Africa is the dominant technological and economic power, and where crime, war, disease and poverty have been banished to history, Geoffrey Akinya wants only one thing: to be left in peace, so that he can continue his studies into the elephants of the Amboseli basin.

But Geoffrey's family, the vast Akinya business empire, has other plans. After the death of Eunice, Geoffrey's grandmother, erstwhile space explorer and entrepreneur, something awkward has come to light on the Moon, and Geoffrey is tasked - well, blackmailed, really - to go up there and make sure the family's name stays suitably unblemished. But little does Geoffrey realise - or anyone else in the family, for that matter - what he's about to unravel.

Eunice's ashes have already have been scattered in sight of Kilimanjaro. But the secrets she died with are about to come back out into the open, and they could change everything. Or shatter this near-utopia into shards...

Poseidon's Children 2 - On the Steel Breeze

I do love a story that takes me to a future that is both high-tech, and yet isn't all smooth steel and ceramics. Throw in nanononics and you have me hooked. This is what Reynolds presents us with in this title - a world dominated by Africa, and The Mechanism - a near-global machine oversight system that can reach into your head and offer you communications options second to none, but also prevent you from committing a crime of violence.

Our two protagonists, both 'black sheep' of their immensely powerful family, are as different from each other as chalk and cheese. Geoffrey is content to live in the Surveilled World - the area under direct guardianship of The Mechanism - but doesn't want to be a global powerbroker like the rest of his clan. Instead, he just wants to study the social structure of a herd of African elephants from the inside. Sunday is a struggling artist who wants nothing to do with The Mechanism and so retreats to The Zone - an enclave under self-imposed digital isolation on the dark side of the moon, out of reach of the Mechanism and it's intrusive influence.

Played as pawns in a larger game of hunt 'n' seek by their dead Grandmother, these two young people must not only stand up to a family secret like no other, they must also willingly ally themselves with both sides of a partially-hidden civil war between the two major factions of the world as it is - the anti-AI society of the land-based population, and the less restrictive but still ruthless societies of the Aquatic nations, who are also aiming their eyes toward the stars.

The world Reynolds has built is brilliant. Well populated with an array of characters from every possible part of the spectrum... from those who have turned their backs on even the basics of life in this new world - living in conditions that in today's terms would still be quite well off, but for the era of the story is considered almost akin to being a homeless destitute - right through to the highest eschelons of society who are almost unrecognisable as human, both in terms of their physical bodies and their mental processes. All are detailled and rich in depth that allows the reader to empathise with them, understand them, or just plain dislike them intensely.

This is a world of many wonders, some powerful, some dangerous, but all are well crafted and woven artfully into the tapestry of the story. It's always amazing to get lost in a tale, but one that pulls me in so deeply that I really want to live in that world, despite the drawbacks and pitfalls inherent in it, that is something truly remarkable and satisfying.

Overall, this is one of those stories that left me feeling like I had lost a good friend when I finally closed the back cover and put the book aside... but I take heart from the fact it is Book 1 in a series! Yay! Sure, it's not going to be to everyone's tastes - nothing ever will be all things to all people - but for those who have enjoyed any of his previous works, or just like gritty sci-fi that doesn't just wave super-science around casually and rely on the reader just accepting it, then this is certainly worth checking out. It has a level of technology advanced enough to be clearly in the future, yet still within the bounds of possibility, based on advances being made in today's real world.

Hundreds of ships carrying thousands of Viking warriors are attacking medieval Paris. The Parisians are fighting back, but they can only hold out for so long. And that's bad news - especially since Dak has been captured and forced to work with the invading army while Sera and Riq defend Paris from within. No matter which side wins, the kids will lose... unless Dak can find an ally among some of history's fiercest warriors. Join Dak, Riq, and ... more...