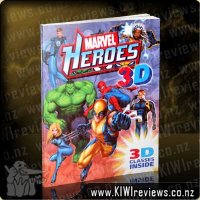 When We Were Very Young
Rating: 9.3

Gorillas In Our Midst
Rating: 10.0

BUT WAIT!!!! Put on the enclosed 3-D glasses and you have the whole 24 pages in 3-D, and I tell you its soooooo much better in 3D! But wait, did you ever want to know more about your Hero? Well then each page of Hero contains information about each them such as their height, weight and a brief biography explaining their powers and weapons.

A fold out poster with the Marvel Heroes in 3D is in the book too, which would be great on that comic superhero fans wall. Only downfall to it is that the two of the pages on the back of the poster contain info and pictures of Wolverine, Phoenix and Storm.

Over all, this a fantastic book. Well worth the money and fun factor!

Finally found time to sit down for some reading with the kid today. Gosh, that sounds bad, but we have been out and about all weekend with little quiet time for reading. That said, reading is something we love to do and embracing books of all themes too.

I picked up this 3D Marvel Heroes book and showed her the pictures. She is very familiar with these characters as her dad is an avid comic-book reader. We also own some Marvel board books from when she was a baby.

I pulled out the 3D glasses and explained that we had to be careful with them. They are hard glossy cardboard, but kids can sometimes wreck these things in seconds. She put the glasses on and gasped as the pictures started to come out of the book towards her. She shifted the glasses on and off her face, seeing the difference. I could have just left her there to enjoy the weird experience for an hour. She was thrilled.

After she had finished her experimenting, I read her some of the stories inside. They are short, but a good length for kids (or anyone really) and gives a nice overview of each hero and even some villains. Totally recommend this, the price is cheap and the wow factor is very high indeed.

I must say that this was quite a cool book, I was anxious to read it as soon as I saw the cover. I was glad that the book came with 3D glasses, okay I already had a pair tucked away, but even if I didn't, like most people out there, I would still experience the realistic 3D effect! Now, speaking of 3D, the effect was really strong, every page seemed like a window into an non-existing space. Even though the glasses were the blue-eye-red-eye type, but when I looked through the book the pictures kept most of their original colour.

The short blurbs on each of the characters in the book were good, they weren't very long, but they had just enough information to help you know more about your masked marvels. The pictures were of good quality, each one looked great, and they had perfect shading and highlights to give you a bit of 3D effect without the glasses. I wish that there were more heroes in this book, for there are still others that I am anxious to know more about, so I do very much hope that another book is published at some point, but this one will have to do for now.

The price is good, very cheap, and not too expensive for some people. I will at some point read this book again, and again, and again until the excitement has worn off, but I can predict that that will be quite a while away. All together, this book is awesome, and perfect for kids as old as 15 at the most, so I hope you enjoy the book, it is most definitely one you don't want to miss.

If you (or the young boy in your life) is into Marvel Heroes then this is pretty cool. This book has 24 pages with 3D pictures of Marvel Heroes including Dr Doom, Green Goblin, Mysterio, Panorama, Hulk, Wolverine, Daredevil, Elektra, Thing, Human Torch, Invisible Woman, Phoenix, Cyclops, Mr Fantastic, Storm and Spider-Man.

Each 3D picture of the Hero has information about them such as their height, weight and a brief biography explaining their powers and weapons. Probably not as much info as you might want but I think the purpose of the book is more the very cool 3D pictures of the Heroes. The pictures are pretty awesome and a much better quality than some other books I have seen.

The centre contains a fold out poster with the Marvel Heroes (also in 3D), which would take pride of place on any young boys wall I should imagine. The only thing being that if you take the centre four pages out for the fold out poster then two of the pages on the back of the poster contain info and pictures of Wolverine, Phoenix and Storm.

The book says from age 3+ and I would think any boy from about 3 years up would love it. 3D glasses are contained in the book.

This is a book that would appeal to a young male reader and books like this do encourage reading in boys as they have information that young minds find important to know!!

So overall I would have to say this would be a winner with any young boy who is into his "Heroes" !!

A good birthday present or reward for achieving some ticks on the reward chart!

Jungles come in many forms: there are the steamy rainforests of the Burmese highlands; then there are the lies, deceit, and betrayal of the world of covert operations; and there are the dark and twisted thoughts of a man bent on near-global domination.

To pull off their latest mission, Juan Cabrillo and the crew of the Oregon must survive them all.