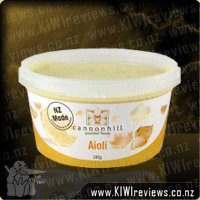 Disclosure StatementFULL DISCLOSURE: A number of units of this product have, at some time, been supplied to KIWIreviews by the company for the purposes of unbiased, independent reviews. No fee was accepted by KIWIreviews or the reviewers themselves - these are genuine, unpaid consumer reviews.
Available:
at selected quality retailers, and via the online store

The most classic and versatile of all mayonnasies. Real garlic, full flavour, real tasty!

I first tried Cannon Hill Aioli when they came to the Dunkleys Craft Show in our town. It was the first Aioli I had ever bought and I loved it, I think it lasted in our house about a week or so.
Its very versatile and can be used with anything, I love it in a sandwich or especially like it with roast potatoes. I was lucky enough to win the hamper from a competition they had running so got a big selection of their items. I received the Aioli and once again it didn't last long in our family
It is rich in flavour and has a really nice garlic taste and it is quite thick which is great, unlike some other mayonnaise that can be quite runny.
I know buy it regularly at the markets. I think its a great price for what it is and we have now learnt that you don't need a lot of it so it lasts a little longer.
Its also really great with fish. The uses are limitless, as everyone's personal preference is so different. I haven't found any other Aioli that has a similar taste to the Cannon Hill Aioli, I will continue buying it for my family. I would definitely recommend it for anyone to try, you will not be disappointed.

The aioli was the first thing I tried when I received the products. I had asked a friend over who was an aioli fan and we really just opened it to see what it looked like, but it looked and smelled so good we had to try it straight away.

It was a lovely creamy mayo with a slight gloss on it, and it had a heavenly smell of garlic. We had some chunky cut carrots and cauliflower and some crackers - we dunked these in the aioli and it tasted even better than it looked. It was quite rich and we could taste the eggyolk behind the garlic, and just a hint of lemon.

We tried it in place of mayo in a roast pork and salad sandwich and it was great - we didn't need to use butter. We also tried it with hot sweet potato chips and it was fabulous.

All in all we were very impressed - the flavour and the texture were superb and we could tell it was a good quality product. We would buy it again because it's a product we enjoy and we appreciated the quality.

I have tried to make my own "garlic mayo" in the past to no great success, so my hat goes off to anyone who can make a decent one in anything less than a commercial factory. Or laboratory. Or Sorcerer's Cave. This was quite a way beyond "decent".

The silky smooth texture and rich colour were very appealing to the eye, and the garlic aroma that came out was wonderful. In typical New Zealander style we were having fish & chips for dinner so everything got dunked into the pot. It was great with chips and the fish, went really well with the sausages, crabsticks and nuggets, and added a really nice flavour to the spring rolls. Everyone was really chuffed. Sure, it costs a lot more than getting garlic butter, but it tasted heaps better.

I grabbed the pot away before it was all used up and the next night used the remains with a little cider vinegar, ground black pepper and some sour cream to make a really nice salad dressing that also worked well dribbled over baked potatoes. This is a very clever and versatile dressing.

All in all I think this has to be one of the nicest Aiolis I have tried in many years. In fairness, it has been many years since I had anything better than crushed garlic mixed with mayo from a jar, but this really was wonderful. If it was a little cheaper, or available locally I think it would be a regular dish on our table.

I was lucky enough to be selected to review the Cannon Hill Aioli. Aioli is a staple in our house so we have tried most of the ones in the supermarket.

I loved the taste, I could have sworn it had lemon in it but there were no lemons on the ingredients list. The garlic and mustard were pleasant but not too strong. It had a smooth texture not thick and gloppy like some we have had. Because it was of a thinner consistency you didn't use as much so the tub lasted longer.

We tried it with homemade oven chips. My 2 year old didn't touch the chips she just dipped her finger into the ailoi and then sucked her fingers. "Yum" was her first response quickly followed by "More." I think she may have rejected it if it had more garlic or mustard but it was just right for a 2 year old's palate.

My husband also enjoyed the aioli but didn't think it was anything too exciting.

As it isn't in supermarkets I would be going out of my way to buy some, but would consider it when we had guests over.

I have always been an Aioli fan. There's nothing better drizzled over a fresh green salad served up with a steak itself drowning in pepper sauce. But Aioli has many other uses in our household. It's great as a dip when mixed with some sour cream or cream cheese, it's wonderful on cold meat sandwiches and often replaces margerine when used, it's wonderful when mixed with plain mayo and stirred through a fresh hot pasta or potato salad... the list goes on.

Having the chance to trial the Cannon Hill version was something I was quite excited about, as the range and quality of their goods almost seems too good to be true when you read about them. In this case however, I can say with a clear conscience that the product lives up to the hype. This. Was. Amazing.

I tried it on a variety of sandwiches - ham, luncheon roll, plain cheese, vintage cheddar and tomato, salad... it complemented everything so well I was beside myself with gastronomic delight. I made some into a dip by mixing a few tablespoons of it with a tub of sour cream, and used it as a dip for crisps, crackers, carrot sticks, nacho chips and toast sticks. Even my fussy 3 year old tried it and said it was yummy, before running off to demand a pottle of yoghurt.

Where this really came into it's own though, was when I chopped some fresh chives, finely diced onion, freshly ground gourmet peppercorns, and half a pot of this aioli, mixed them together and left them overnight in the fridge. In the morning, I made up a fresh potato salad for our planned BBQ lunch and used this dressing on the salad. Some freshly sliced spring onions mixed in just before serving, and the flavour was astounding. If I do say so myself, one of my best Spud Salads to date!

Overall, I really can't fault the product. Only the price put me off a bit, and that was more about the cost of shipping it up, refrigerated, from the South Island. If you have a Gourmet store in your town, you should 'gently suggest' they get in touch with Cannon Hill (the details are all in their website) and begin to explore the options to stock the goods. If their customers have anything close to active tastebuds, they will adore this!