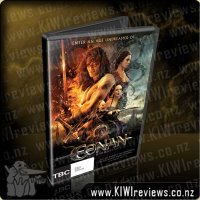 Disclosure StatementFULL DISCLOSURE: A number of units of this product have, at some time, been supplied to KIWIreviews by the company for the purposes of unbiased, independent reviews. No fee was accepted by KIWIreviews or the reviewers themselves - these are genuine, unpaid consumer reviews.
Available:
on DVD from December 2011

The most legendary barbarian of all time is back. Having thrived and evolved for eight consecutive decades in the public imagination in prose and graphics, on the big screen and small screen, in games and properties of all kinds - Conan's exploits in the Hybornian Age now come alive like never before.

A quest that begins as a personal vendetta for the fierce Cimmerian Warrior soon turns into an epic battle against hulking rivals, horrific monsters and impossible odds, as Conan realises he is the only hope of saving the great nations of Hyboria from an encroaching reign of supernatural evil.

Whenever someone decides to do a remake/reboot of a movie/movie franchise they are taking a big risk, and if that movie/franchise is a cult classic then the risk is even more. Some remake/reboots work, such as Batman Begins however many don't and fail miserably, and unfortunately this one falls into that category.

This could have been a great remake however it was let down in a couple of ways, firstly the casting, while I thought some of it was truely inspired, some of it did leave me wondering. I thought Jason Momoa was a great choice especially after his recent stint in Game of Thrones (which ironically started filming 1 month after Jason finished fiilming this), also a good casting was Stephen Lang as Khala Zym who most will know from Avatar, but who will also be seen on our TV screens (hopefully soon) as a good guy in the TV show Terra Nova. Unfortunately I found the rest of the movie a bit miscast.

The second way I felt it was let down was the fact that this Conan could speak and speak relatively well, this to me is not a barbarian, but an educated brute.

On the plus side I felt the special effects and the fighting sequences were well done and do deserve recognition for that.

I shall now go back and watch my original 1982 version of Conan just to appease myself, and all the while I shall think of all the remakes/reboots coming our way in the next year and I shall hope that they don't all suck as much as this one.

In my early days, I recall watching the original with Arnold Schwartisface mumbling his 6 or 8 lines, and showing off his prodigious musculature... and thinking "Yeah, whatever... where's the sword fights?!" Seeing James Earl Jones as a cult-leading snake-god was pretty awesome too, I must admit. So it was with some interest I sat down to watch this relaunch version, starring Jason Momoa (most recently starred as Khal Drago in the TV adaptation of A Game of Thrones) as the Main Muscle himself, Rose McGowan as an evil sorceress, Ron Perlman (Hellboy himself) as Conan's pop and Stephen Lang (Senior Military Grunt in Avatar) as the rather unpleasant self-proclaimed Warrior King, Khalar Zym.

Frankly, I was quite disappointed. The storyline itself was flat and had no unpredictable twists - the only way they could have made them less obvious was to have had a little subtitle running at the bottom, telling you what is coming 3 minutes ahead. Casting Rose McGowan as a psychotic sorceress was simply inspired... if you are actually TRYING to make the audience wet themselves with laughter. Sorry, but a more 'wrong' choice could only be made by involving a committee. Where the casting DID make some sense was putting Stephen Lang as a tyrannical evil king hellbent on supernatural dominion of the world. That guy always seems to pull off the "nasty bugger" characters with great ease... -grin- I have to wonder if it's another case of Keanu Reeves Syndrome - he isn't acting, that's just what he's like.

Overall, I regret to inform you of the death of this, a treasured and much beloved barbarian... the highly energetic Momoa does little to salvage this, and frankly I doubt he would have been capable of it. I mean for crying out loud... this Conan can string whole sentences together in a well-structured and coherent conversation... this is NOT Conan the Barbarian! May he Rest in Peace with Krom. The one, and by far only saving grace - that mask was just so nasty... it was inspiring! Yes folks, as is to be expected, the special effects saved this from being a complete rout in the boxoffice. Even so, I'll stick with the classic version any day!

Welcome to the Belko Industries - a normally calm workplace that's about to devolve into a blood-soaked battle royale and a shocking case study of bone-crunching horror! When 80 American employees are suddenly locked in their office building in Bogotá, Columbia, a mysterious voice on the intercom orders them to participate in a ruthless game ... more...