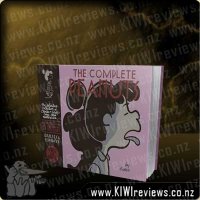 A definitive collection of Charles M. Schulz's masterpieces of comic art presenting every strip from 1967 to 1968. Foreword by John Walters.

Snoopy's identity as the World War I Flying Ace has almost entirely taken over, in this volume although he finds time to moonlight as an arm-wrestling champion, a figure skater, a vulture, and a "Cheshire Beagle." Plus: Did you know Charlie Brown was not his original owner? The secret is revealed...

Franklin and Jose Peterson also take their initial bows, side by side with Charlie and Sally Brown, Linus and Lucy, Schroeder, and cover girl Violet.

There is a debut appearance for two ethnic characters - Franklin, who is apparently a sand castle master builder (African-American) and Jose Peterson, a reliable ball slugger (Mexican/Swedish). There is also an obvious plug for immunisation.

Peppermint Patti appears quite often, Violet much less* and Pig-pen hardly gets a look in. (* A number of fans of this series have noted the unusual choice of Violet on the cover, as she does not appear often in this volume.)

We learn for the first time that Snoopy had, albeit briefly, a previous owner (Lila). It is Linux whose research uncovers this shocking truth (he called up the Daisy Hill Puppy Farm) and who remarks to Charlie Brown "You got a used dog!"

There are some brilliant strips in this collection and fans of 'Peanuts' will find plenty to enjoy, especially those who are familiar with Americana and general events of the time.

For me, the WWI Flying Ace strips became a bit over-laboured (that being said, this was one of Snoopy's most famous personae). I found the overall reading experience for this volume a bit flat compared to the volumes from '59 to '60 and from '61 to '62, but still consider it a worthy addition to the shelf.

Score: 4.5
Product reviews for listing 4325: A Taste of Chlorine
Written by Bastien Vivès

A teenage boy suffering from curvature of the spine begins swimming every week at the local pool, at the repeated request of his chiropractor. In the interior and echoing world of the swimming pool, surrounded by anonymous bodies and in between lengths, he becomes acquainted with a girl who agrees to give him pointers on his poor technique.

It is the start of a tentative friendship, one that exists only in the water, every Wednesday; ... more...